The Bucks took to the streets of Milwaukee to celebrate their NBA championship. 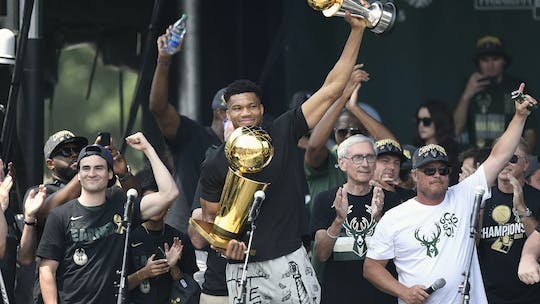 Thousands of fans lined downtown Milwaukee streets on Thursday to catch a glimpse of their beloved Bucks in a parade to celebrate the city’s first NBA championship in half a century.

The Bucks’ parade began at noon ET and snaked through the streets of downtown Milwaukee in celebration of the franchise’s first NBA title since 1971.

Six police officers on horseback clopped past cheering fans at the head of a procession that included a hook-and-ladder fire truck, occasionally blaring its horn, and open-air buses and flatbed trucks carrying Bucks stars including Finals MVP Giannis Antetokounmpo and Jrue Holiday, as well as the trophy they captured Tuesday night with a Game 6 victory over Phoenix.

Gov. Tony Evers even declared Thursday “Bucks In Six Day” in Wisconsin, a rallying cry among the fan base ever since former Milwaukee guard Brandon Jennings incorrectly predicted his eighth-seeded Bucks would win a 2013 first-round series over the top-seeded Heat in six games.

Below are some of the best moments, interviews, images and more from the Bucks’ title celebration:

Giannis just shot a free throw into the crowd 😂 pic.twitter.com/gkvoeU6H1P

Underdog to the top dog!! pic.twitter.com/R93K0fZBct

Giannis happy to see happiness at the Bucks 🏆 parade. 😁??

Ok. One more update crowd shot here from the #DeerDistrict. The amount of people is increasing quickly. pic.twitter.com/IwxpRuJ2S6

🗣? Hear Khris Middleton talk about his journey, the Bucks roster, and the what's ahead.. from the parade bus! 🏆

Bobby Portis’ mom with the trophy is a VIBE 🏆 (via @BPortistime) pic.twitter.com/x7FOmFJjkV

And there is the Larry O’Brien Trophy: pic.twitter.com/reScLpoXHI