The trio of Brittney Griner, Skylar Diggins-Smith, and Diana Taurasi showed out in the playoffs but the Mercury ended up losing to the Sky in four games. 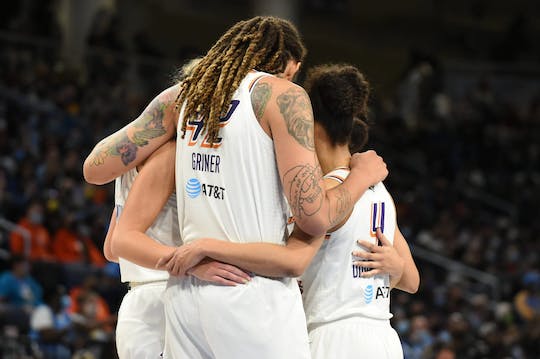 Emotions were all over the place after Game 4 of the 2021 WNBA Finals. After shaking hands with their competitors, the entire Phoenix Mercury took off abruptly once the match was over. While head coach Sandy Brondello went to the post-game press conference, all her players skipped it.

The game ended in a heartbreaking loss to the Mercury, who seemed like they were going to force a deciding Game 5. The Chicago Sky rallied back from a double-digit deficit to close out the championship series on their home court.

Brittney Griner played excellently with 28 points on 12-of-19 shooting. However, things were not the same with veteran Diana Taurasi. Off shooting nights plagued her as she shot 4-of-16 from the field in Game 4. Taurasi reportedly busted a door in the visiting team’s locker room out of frustration.

The tough loss to the Sky should not erase the fact that the Mercury had a spectacular finish to an initially subpar season. Phoenix finished the regular season with a 19-13 record that put them at the No. 5 seed. To make it into the Finals, they had to go through a long and arduous path, similar to the sixth-seeded Chicago.

The Mercury beat the New York Liberty in a knockout match in the first round, then they won against the defending champions Seattle Storm. Despite falling out of the top two, the Storm were still fan favorites to win it all, but not having Breanna Stewart at full health only helped the Mercury advance to the semifinals.

Phoenix then had to go up against the fully rested Las Vegas Aces. Former MVP A’ja Wilson and Sixth Player of the Year Kelsey Plum both had excellent games but it was not enough to hold out the Mercury’s firepower. They stretched the series to a dramatic Game 5 decider, where one of the most iconic moments for Taurasi happened.

The Aces looked like they were on their way to another victory when Taurasi went off in the fourth quarter, where she scored 14 of her 24 points, completely erasing Las Vegas’ lead and cementing Phoenix’s spot in the Finals.

Chicago dominated in the first game of the Finals, but the Mercury immediately responded and tied the series with an overtime win in Game 2. Unfortunately for Phoenix fans, the team could no longer keep up with the Sky in the next two games in Chicago.

After all the pain and anguish, there are still several positive takeaways for the Mercury.

The team made it all the way to the Finals without their starting guard Kia Nurse who suffered a torn ACL in her right knee in Game 4 of the semis. If she was on the floor, Phoenix could have had a better matchup for Allie Quigley and Courtney Vandersloot.

The Mercury’s bench showed that they are capable of stepping up when they are needed. Shey Peddy played a crucial role on both ends of the court in their Game 5 win against the Aces when Nurse and Sophie Cunningham were down with injuries.

Phoenix should also thank the services of both Skylar Diggins-Smith and Griner, who really gave it their all in the postseason. Diggins-Smith averaged 17.7 points, 3.3 rebounds and 5.3 assists, while Griner had 20.5 points, 9.5 rebounds, and 2.7 assists per game.

Lastly, everyone must remember that Taurasi’s legacy just keeps getting better. In her 17 seasons in the WNBA, she already has four championships and an MVP award with the Mercury. She also holds the league record for most points with 1,439.

She is also a 5-time Olympic gold medalist, 6-time Euroleague champion, and a 3-time FIBA World Cup gold medalist. The list goes on and on with Taurasi, who had to battle multiple injuries this season, so this championship loss is really just a small speck on her illustrious career (but of course, another title before she retires won’t hurt).

There’s a reason fans voted Diana Taurasi as the greatest WNBA player of all time.

"In these moments, you just can't care anymore"