NBA 2K22 first impressions: A 2K Day like no other 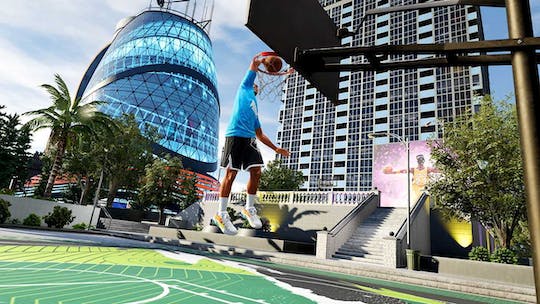 Innovating NBA 2K has been like writing on dry concrete for the better part of the last 10 years: the game has become so good, that improvements seem to come in increments every year.

But how does one make the best better? In 2K22, on both current and next generation consoles, the NBA once again can claim to have the best representation of the league – and even the sport – in the video game space. It really doesn't get any better for a sports fan than booting up 2K22 and trying to simulate NBA basketball.

With that being said, 2K22 feels like an opus for 2K Studios. They were panned, rightfully so, for a less than smooth transition to next gen consoles in 2K21, and they redeemed themselves this year. Current gen 2K22 feels like a very different game from next gen 2K22, in all the right ways. It was a herculean task for 2K to continue pushing the envelope for the next gen users, while still putting out a quality game for current gen.

2K’s crowning game mode has always been MyCAREER and this year's iteration actually has a pretty fun storyline. You’re MP, a young hooper with an already massive YouTube social media following. Think of yourself as LaMelo Ball without the over-supportive dad. Instead of LaVar, you have Ricky, the Rich Paul to your LeBron James.

On next gen consoles, right off the bat you get the full breadth of what it's like to be a prospect trying to carve your path to the NBA. You can choose the traditional route of going to college or you can turn pro immediately and sign with the G League Ignite, just like Jalen Green. When you do make it to the league, you have a choice right away to establish your off-court ventures – becoming a fashion and music icon. You can be on GQ like Russell Westbrook or be on XXL Mag like Damian Lillard.

On current gen, you don't get the same branching paths as  next gen, but you might as well name your character Andy Samberg because you’re on a boat. The Neighborhood on current gen has been revamped to a cruise ship named the Cancha Del Mar. This ship must be the size of BGC with how sprawling it is with all the areas we've become accustomed to like shops and courts, and new additions like ziplines, museums, and an entertainment lounge.

It's pretty amazing to think that in 2K12, MyCAREER was more of a text adventure and your interactions with characters were very limited. 2K22 continues 2K’s march to eventually becoming GTA-like in sheer size and detail.

On next gen, the Neighborhood also got an overhaul, mainly being much more stable than it was in 2K21. While the story on both consoles doesn’t dive too deep into the glitz and trappings of life as a Gen Z NBA star, it’s still very entertaining. The cutscenes are pretty polished, from the dialogue to the facial movement, with pretty solid humor and actual chemistry between the two protagonists. If you choose not to participate in the story this year, you’ll definitely be missing out.

#AnyoneAnywhere can be a superstar in 2K22 🌎

As for the MyCAREER gameplay, the formula is still there. The pie charts we’ve become accustomed to are packed on current gen consoles, while next gen has more options for stats distribution and a clearer path for badges in the player creation menu. It still feels like there are pie charts, only hidden. Time will tell what the MyCAREER meta will look like, but early returns point to a more balanced experience. On next gen, you definitely won't be seeing the highly optimized power forward builds with 100 badges.

2K also added a seasons progression feature, quite similar to MLB The Show's Innings program or Fortnite's season pass. You earn free rewards and gain progression the more you play, and by the end of a set period of time, you get a much bigger prize, depending on how well you played throughout the season. An overall solid change of pace.

The best way to experience 2K22 in all its glory is still the way we’ve grown up with the game – sharing a couch with a buddy and hopping on Play Now with your favorite teams.

2K's presentation is legendary as hopping into a game genuinely feels like watching a real game live. The graphics have always been amazing, and 2K22 on both consoles are on par with what we’ve become accustomed to over the years.

Gameplay-wise, 2K can be as simple or as complex as you want it to be. There's as much fun to be had with knowing just how to use turbo, pass, and shoot as there is to knowing how to use a team's full playbook. 2K22's AI shows plenty of polish on both offense and defense. Try playing against Hall of Fame defense for the first time and you'll probably end up shooting zero percent. It's become that good.

Then there are the details that we take for granted. Kevin Harlan and Brian Anderson sound electric and dynamic on the call. Every arena truly feels unique, especially now that they added the Public Announcers from every venue. The NBA players even come into the arena in #NBAFits.

On the court, every player plays like their real-life counterpart. It's incredibly satisfying pulling off James Harden's double step-back. Steph Curry legitimately makes an open shot from half court. These tiny bits that we’ve gotten used to have become the standard for NBA 2K games, but these details are what sets NBA 2K22 apart from Madden NFL or MLB The Show. No one else puts the sport’s product on a video game quite like 2K with the NBA.

If you’re still on the fence about picking up the game, this year's iteration definitely deserves an early buy. 2K Day this year was definitely the best it's been in a while.