NBA announces Players, Rookies and Coaches of the Month

Stephen Curry and Russell Westbrook earn Player of the Month honors, while Anthony Edwards and R.J. Hampton lead the rookies. 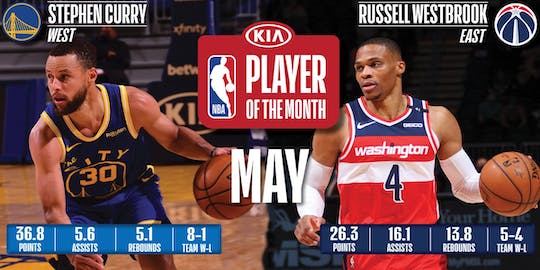 Golden State Warriors guard Stephen Curry and Washington Wizards guard Russell Westbrook have been named the NBA Players of the Month for May.

Curry finished the season on a tear as he led the Warriors to the Play-In Tournament and, in the process, secured his second career NBA scoring title. Curry finished the month with averages of 36.8 points, 5.6 assists and 5.1 rebounds over 8 games.

Westbrook surpassed Oscar Robertson this month for the most triple-doubles all-time as he led the Wizards to the No. 8 seed in the East. Westbrook averaged 26.3 points, 16.1 assists and 13.8 rebounds over 9 games in May.

Minnesota Timberwolves forward Anthony Edwards and Orlando Magic guard R.J. Hampton were selected as the NBA Rookies of the Month for May.

Portland Trail Blazers coach Terry Stotts and New York Knicks coach Tom Thibodeau have been named the NBA Coaches of the Month for May.

Stotts coached the Blazers to a record of 7-2 in May as the team clinched the No. 6 seed in the West to avoid the Play-In Tournament.

Thibodeau and the Knicks continued their special season with a record of 6-3 in May to secure the No. 4 seed in the East and home-court advantage in the first round.
Read Next
News