Looking at player comps for the draft's best prospects based on physical tools, athleticism, and skill sets. The best part of the NBA Draft is all the potential – the speculation on what a group of young players could look like down the road and end up shaping the league's future or even how basketball is played.

The not-so-great part about the draft is the prevalence of all the vague scouting jargon. You can pretty much talk about any prospect by just using words like motor, tools, fluidity, or verticality and get away looking like you know exactly what you’re talking about.

One more concrete way about speculating on prospects is making comparisons. No two players are alike, sure. But getting a visual, concrete representation of what a prospect would like in the league through someone who is playing or has played in the league is valuable.

The following are player comparisons for some of the best first-round talents in the upcoming 2021 NBA Draft. These aren’t meant to define or box players into certain limitations, but to better express their best and most realistic outcomes in the best basketball league in the world.

Every Filipino's favorite prospect is also one of the hardest players to come up with a comparison for. Given his 6-foot-5 frame, solid shooting off the bounce, and elite athleticism, the most used comparison for Jalen Green among NBA scouts has been Zach LaVine. The Chicago Bulls All-Star is a solid comparison not only for their similar athletic gifts but also because they will most likely need time to develop. LaVine needed five years to get to an All-Star level. Listed at 180 pounds, Green might need five seasons just to put on the muscle and strength needed to thrive as a scorer in the league.

But, one cool comparison that's been brought up a few times is to Allen Iverson. Coming out of Georgetown, young Allen Iverson had incredible hops. The obvious height difference is the biggest detractor to this comparison as Iverson was listed at six feet but was probably one or two inches shorter than that.

The NBA Draft is just a couple of days away!

Watching Green make plays for himself, however, does evoke a lot of young A.I. – from the advanced shot creation through his dribbling to the way they finish at the rim. It's almost uncanny how similar they fly around – not through – contact to finish over bigger defenders.

The hope is a team can one day build their offense around Green. No one was more of a singular offensive force than prime Iverson.

Few prospects come into a draft described with as much guarantee for NBA success as Cunningham, the 6-foot-8 guard out of Oklahoma State. He's already built like an NBA player and he could probably play on any roster in the league.

Cunningham’s outlier trait, however, is his fluidity – a scouting term that describes how easily and quickly a player makes great on-court decisions. It's a trait we can see from all NBA superstars – whether it's LeBron James seeing everything happening on the court or Kevin Durant always making the best move possible to get a bucket.

This smoothness is what will carry Cunningham throughout his NBA career. There really isn't any current or past NBA player that combines all of Cunningham’s traits, but Manu Ginobili does come to mind as a winning player that had all the tools needed to be a successful guard on any team. Ginobili's career averages of 13 points, four rebounds, and four assists don't exactly paint him as a superstar. However, Ginobili was, at times, the second or third best player on a San Antonio Spurs team that won three titles in his prime and one more when he was the savviest veteran in the league.

Cunningham could do everything on offense like Ginobili – from 3-point shooting to the crafty finishing at the rim. One major difference will be in the pick-and-roll as Ginobili was never asked to be a pick-and-roll ball-handler too much with the Spurs while Cunningham will probably be asked to be more as a team's initiator.

No matter how Cunningham is eventually used by the team that drafts, he’ll most likely thrive, just like Ginobili on the Spurs. 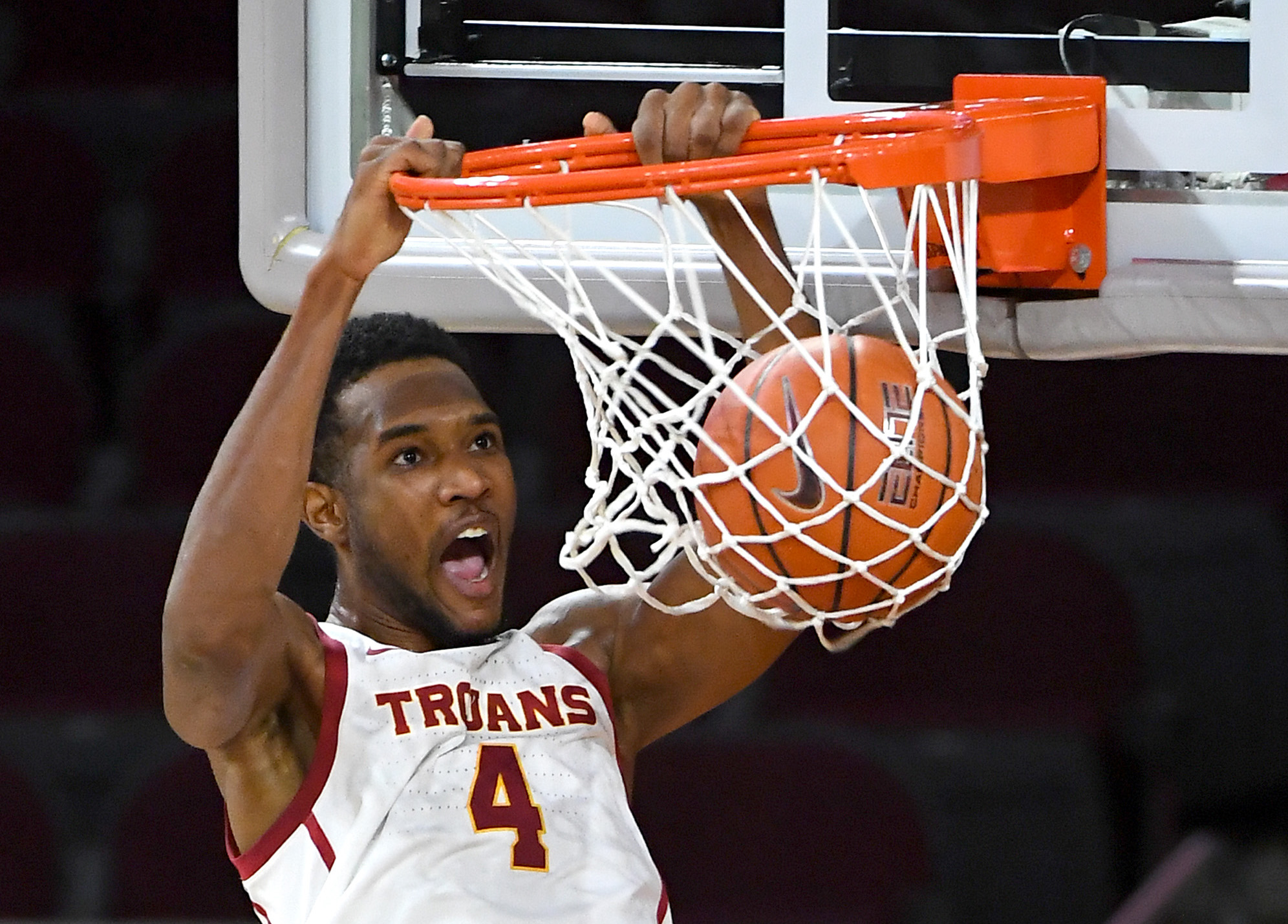 Evan Mobley had a terrific season at USC, but even before he went to college, he was already seen as a potential top pick.

Mobley epitomizes the modern big man – a tall, lanky all-around athlete that can defend the paint and be versatile enough to execute whatever pick-and-roll coverage a team needs to deploy. Unlike other big man prospects in the past decade, Mobley flashes a bunch of offensive tools rare for a center. He’s a capable passer that could one day average Marc Gasol-like assist numbers. He has a workable perimeter shot that's only going to get polished in the NBA. His handles are above average. The team that drafts him will decide how he fits into the league because, realistically, he can develop his skills to be closer to a seven-foot wing than to a center.

There's really only one player that profiled the same as Mobley when he came into the league – Kristaps Porzingis. It's hard to see now with all his lower-body injuries, but when the Latvian first came into the league, he seemed more comfortable in the perimeter than he did in the paint, cutting, slashing, and even showing off a solid jumper. He was a terror attacking close-outs with his handles.

Mobley and young Porzingis are both unicorns. They probably won't develop any post moves, but they're still potentially transcendent.

The guy everyone knows from that buzzer-beater in the Final Four, Suggs isn't as highly regarded as the top three picks in this draft, but he definitely could’ve been a number one pick any other year.

Suggs is a big point guard, standing at 6-foot-4 with a 6-foot-6 wingspan and weighing in at 205 pounds. His numbers at Gonzaga don't exactly pop off the page. What he did do at Gonzaga was contribute to a winning culture. He had a great feel for when to create for his teammates or look for his own shots. He was also an excellent on-ball defender. Though he might struggle to keep up with the physicality in the NBA, Suggs has shown that he’ll compete on that end, no matter the matchup.

He's been compared to several notable point guards, but Chauncey Billups seems apt. Billups was one of the best winners of his time, winning a championship with the Pistons in 2004 and helping that team stay a powerhouse for the next four seasons. Billups was an elite game-changer – one that constantly set his team up for success. The big shots were only part of his clutch repertoire, Billups was the quintessential point guard for those Pistons teams and later on with a Nuggets squad that made the 2009 Western Conference Finals.

Suggs has a great chance to establish himself as a winning player, especially if he goes to a team like the Toronto Raptors that could be postseason contenders next season. The biggest difference between Suggs and Billups was Chauncey needed a good six seasons to find his niche in the NBA. Suggs has a chance to be great right away.

Right after the fourth pick is when the Draft truly gets spicy and Jonathan Kuminga represents ghost pepper levels.

Kuminga has a decent chance at becoming the best player in this draft with his physical tools (6-foot-6, 7-foot wingspan, 215 pounds) and the flashes of brilliance on offense. As we saw during his stint with Ignite, Kuminga is just that – mostly flashes of a prototypical NBA wing. The hope is that his exposure in the G League was enough and that he will take steps to further improve his overall game – from his shot mechanics to his defensive IQ. He's a project that a team with a solid developmental track record shouldn’t mind taking a crack at.

This is exactly what Luol Deng was during the 2004 Draft. Coming out of Duke, Deng definitely wasn’t a surefire prospect. None of his skills immediately translated to the pros. He did eventually get better, adding a solid midrange game to go with a reliable 3-point touch. He was one of the best defensive forwards of his time, as well, becoming a two-time All-Star and an All-Defensive Second Team member once with the Chicago Bulls.

A forward that can guard five positions and with a solid jumper is the hottest commodity in the NBA. The search for a 3-and-D wing has driven how teams have opted to develop and scout prospects. Kuminga turning into a Luol Deng-type of player is exactly the outcome the team that drafts him is hoping for.

Other fun comparisons for later 1st round prospects

Franz Wagner — Mo's brother is the most tantalizing international prospect in the draft. His jack-of-all-trades skill set inspires plenty of Lamar Odom-esque potential – someone who can run the offense from the wing and be impactful on defense. If he doesn't turn into Odom, he could be Magic Hedo Turkoglu. Not as good as Odom, but still a solid turnout for a mid-first-rounder.

Chris Duarte — The Cam Johnson of this draft, Duarte is coming into the league as a 24-year-old, the same age right now as Devin Booker. Duarte is neither of those players skill-wise, but he does have the prettiest jumper among the crop. Whether it's the high release or the constant moving he did in Oregon's offense, Duarte seems like a Reggie Miller lite. Hopefully, he goes on a team that puts him in a ton of off-ball action.

Alperen Sengun — It's going to be interesting to see how the teams view Sengun, the 18-year old Turkish league MVP with a sweet set of post moves. He might not be long enough to be a center in the league, but he could be a great throwback forward, like Chris Webber. He's right around the same level athletically and is already a great passer. He could turn out to be the biggest steal of this draft.