Can Giannis Antetokounmpo return from injury and lead the Bucks to a title? Or will Chris Paul finally win a ring with the Suns? 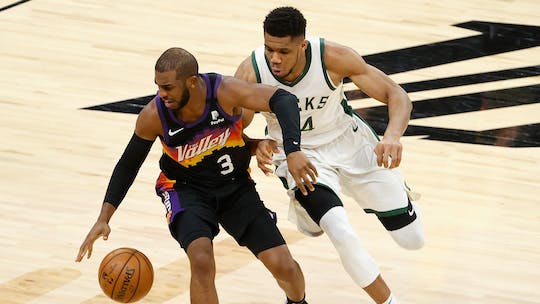 To say that this year’s NBA Finals will be historic is an understatement. The Phoenix Suns-Milwaukee Bucks matchup feels like a fitting end to a season filled with various twists and turns.

Only a few, if any, saw this coming. Many predicted that superteams like the Los Angeles Lakers and Brooklyn Nets – both ironically defeated by this season’s finalists in the playoffs – will reach the finish line.

Instead, the NBA Finals now features a group of players with no championship experience save for the Suns’ Jae Crowder, who was part of the Miami Heat last season.

The Suns have never won a title since joining the league in 1968. This is their first Finals appearance since 1993, three years before their superstar Devin Booker was born.

Meanwhile, the Bucks have won a championship, but it happened five decades ago in 1971. That was only their third season in the NBA, and since then, they have only returned to the Finals once in 1974.

Now, both franchise are off to make history.

The Suns can become only the third team to win the crown after missing the playoffs in the previous season, next to the 2007-08 Boston Celtics and 2019-20 Los Angeles Lakers.

On the other hand, the Bucks just became the first team to reach the NBA Finals without a single player with previous Finals experience since the 2014-15 Golden State Warriors. If they manage to win it all, it would be the franchise’s first title in 50 years.

After 16 seasons, Chris Paul finally reached the NBA Finals at age 36. Winning a championship would further cement him as one of the greatest point guards in league history. The undersized, 11-time All-Star has been the key to the Suns’ success. His playmaking, scoring abilities, and leadership have worked wonders for his young team. Deandre Ayton even said that Paul was “the best thing to happen” in his career.

Antetokounmpo also seeks his first championship after being named MVP twice in back-to-back seasons. His ability to lead his team to deep playoff runs has been questioned since his rise in the 2016-17 season. Being in the Finals after losing this year’s MVP trophy to Nikola Jokic proves that he is determined to win the crown and not just individual awards.

Now is the perfect time for either Paul or Antetokounmpo to get their first chip. With all the other superstars booted out, it’s now or never for both of them.

The 2021 playoffs have been marred with injuries and the players' health remains a prevalent issue heading into the Finals. It’s already been reported that Antetokounmpo will be doubtful for Game 1. If he does return at any point in the series, all eyes will be on him and how he will look after a hyperextended knee he suffered during the conference finals.

Aside from Antetokounmpo, we should also keep an eye on Booker and his broken nose. Will we see a masked Booker? If you’re a Suns fan, you’re hoping that your star won’t need his protective gear again.

Then there’s CP3 himself. He has a long history of battling injuries in the playoffs and it’s no different in 2021. After a shoulder injury in the first round, he also had to miss games in the conference finals due to COVID-19. If that wasn’t enough, it was also revealed that he had a nagging injury in his right hand. His 36-year-old body will have to hurdle one more test against the Bucks to claim his first-ever title.

This has been a tough postseason for a number of stars and players and we’re wishing that no one else joins the injured list. We hope that the better team, and not just the healthier team, wins it all.

Additionally, the bench will play a big role in this year’s Finals. Both squads have extremely deep benches who can provide support to their superstars. Since the Bucks and Suns are elite defensive teams, it’s likely that they’ll mastermind a plan of getting their opponent’s stars denied. That’s why head coaches Mike Budenholzer and Monty Williams will have to devise a strategy to get more and more players involved as the Finals series gets going.

Deandre Ayton’s growth from the beginning of the year all the way to the playoffs is nothing short of remarkable. The 22-year-old has managed to erase doubts regarding his defense, rebounding, or durability in postseason basketball.

Against the daunting frontline of the Lakers, Ayton showed that he was more than capable of banging bodies with Andre Drummond, Marc Gasol, and Anthony Davis. In the second round, he went rebound-for-rebound with Nikola Jokic. The MVP still put up his impressive numbers, but Ayton was never overwhelmed in the series.

Ayton’s also passed his last test against the Clippers, who maximized Ivica Zubac and played a ton of small ball. The Clippers weren’t able to fully exploit the Suns with their size and versatility because Ayton just overpowered them on the boards.

At 6-foot-11, Ayton has the size to be the largest guy in the paint without being a liability against smaller units. His multifaceted repertoire will be needed against the Bucks who can either go big with Brook Lopez and Bobby Portis or with a little more speed with Antetokounmpo and PJ Tucker at the frontline.

Everything that Ayton brings — rebounding, spacing, defense, putbacks, being an exceptional roll man off the pick, and more — will make a significant impact for the Suns.

For the Bucks, can Brook Lopez continue to shoot the lights out and be a wrecking ball in the paint?

The 33-year-old veteran became a reliable outside threat for Milwaukee in the last few seasons, which was a significant change with how he was used earlier in his career. He was still a floor-spacer in these playoffs, but we also saw a throwback performance for him particularly in Games 5 and 6 against the Hawks.

Lopez gutted the interior in Game 5 for 33 points on 14-of-18 shooting, seven rebounds, four blocks, and two steals, and he didn’t even need to hit a single triple. In the clincher in Game 6, he only had 13 points but had six boards and three blocks. He was such a force in the paint on both ends, which really helped the Bucks clinch a Finals berth.

Against the Suns, Lopez might want to go to the 3-point line once again to draw Ayton out of the shaded area. He won’t need to score a ton but it will be imperative to shoot those wide open corner shots. The primary concern for him against Phoenix, however, will be defense.

Lopez should avoid being picked apart by the extremely dangerous pick-and-roll attack of the Suns. You can bet that Chris Paul will immediately test the Bucks on their switching schemes and drop coverage. Will Lopez stay far back off a screen and allow a steady diet of midrange shots from Paul and Booker? If a switch does happen, can he stay in front of Booker or Paul?

The Bucks and the Suns have emerged as the best defensive teams in the playoffs.

After you mix in all the deciding variables in this series, at the end of the day, you have to go with which stars will rise to the occasion amid the tight defense.

If the Bucks don’t have a 100 percent Antetokounmpo for the series, that will mean a heavier burden on Khris Middleton. Even though Middleton is an All-Star in his own right and is fully capable of being the go-to scorer for his team, it will still be a tall task to try to take down a strong defensive team like the Suns.

Middleton has averaged 23.4 points, 8.0 rebounds, 5.1 assists, and 1.5 steals so far in the postseason. He’s also coming off a very strong performance versus the Hawks, including a 38-point effort in Game 2 and 32 points in the series-clinching Game 6. His shot-making has grown by leaps and bounds and it could rival the best in the game. Just ask Kevin Durant and the Nets. Can he do it one more series with the defense focused on him until Antetokounmpo returns at full strength?

With the Suns, you have to hope that Devin Booker will have another explosive series. Versus the Lakers, he put up 29.7 points, 6.2 rebounds, and 5.0 assists on 48/42/93 shooting splits. He followed that up with 25.3 points, 7.8 rebounds, and 4.5 assists with his 3-point percentage going down to 30.8 percent but the Suns still easily swept the Nuggets.

Against the Clippers, his broken nose and pesky defense might have gotten to the 24-year-old Booker a little bit. He had 25.5 points, 5.8 rebounds, and 4.7 assists. The main difference was that he didn’t shoot particularly well with 38.2 percent clip from the field and 28.6 from downtown (he did shoot 90.7 from the line).

A mediocre-shooting Booker will be swallowed by the Bucks, who will most likely deploy Middleton on him. And since Milwaukee likes to switch, he will have to navigate against the likes of Jrue Holiday and Tucker. Even a big like Lopez won’t be an easier matchup.

You can argue that outside of a dose of Patrick Beverley and a broken nose, Booker hasn’t truly been tested in his first playoff run. He hasn’t seen a team that can cause a ton of problems on defense like the Bucks. The Lakers were hobbled. There was no Jamal Murray of the Nuggets to chase him. And there was no Kawhi Leonard to slow him down.

If Booker can follow his mantra and “Be Legendary,” that may prove to be all the difference that the Suns need to capture their first title in franchise history.