Trae Young and Joel Embiid are among the NBA stars who have embraced their antagonist roles, making the playoff storylines a lot more interesting. 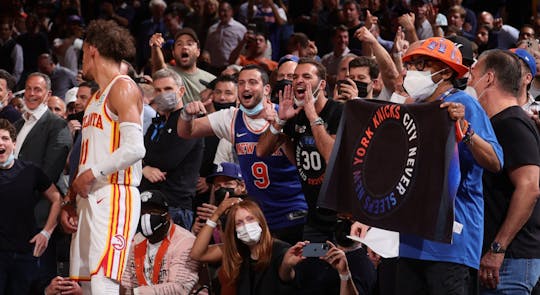 The New York Knicks were on top of the world, breaking an eight-season postseason drought this year, thanks to the unlikely emergence of Julius Randle into an All-Star and a head coaching masterpiece from Tom Thibodeau.

To New Yorkers – not just Knicks fans – this was a rare bright light to a city devastated by COVID-19. That fans were allowed at Madison Square Garden at near full-capacity for the playoffs was a sign that the city was recovering not just from years of subpar basketball management, but also from the pandemic.

If this was a movie, the plucky team of misfits representing a passionate city led by a hoarse-voiced, stuck-in-his-ways coach would win the series -- like in Miracle, The Longest Yard, or The Mighty Ducks. But this was Trae Young's movie and Trae Young wasn't New York's friendly neighborhood hero.

COOLER THAN THE OTHER SIDE OF THE PILLOW. pic.twitter.com/JanRzj1hCB


Game One saw Young hush a rowdy New York crowd, who was pelting him with common New York niceties like the occasional expletives. In Game Five, Young got inspiration from Broadway, taking a bow as he drew the curtains on the Knicks' season.


Some would call this arrogance. Young would call it his edge. As a player, Young’s expressiveness comes out in his shot selection and passing. It also comes out in his oft-criticized foul-drawing tactics. Combine that with his Doc Brown from Back to the Future hairdo and it becomes easy to cast Young as a villain.

But villains, in most movies and in real life, reside on one end of a clear binary. They’re black to the hero's white. They’re the complete opposite of a protagonist.

It's easy to see that Young intends no evil. He’s not Killmonger looking to regain a piece of his identity forcefully taken from him as a child in Black Panther nor is he a loose cannon of death and nihilism like Anton Chigurh in No Country for Old Men, though they do share questionable tastes in haircut.

Young is more like a professional wrestling heel. In the long history of pro wrestling, promoters have always needed a guy for the crowd to cheer against as much as a guy for everyone to love. The face is the wrestling equivalent of the protagonist; the heel, the antagonist. And, spoiler alert, pro wrestling is less of a competition and more athletic theatre. There is a script. There are storylines.

In this sense, everything Young does is performative. Standing in front of the largest crowd for a basketball game since the pandemic, having just played the game of his life, Young understood he was not getting cheered in New York. Instead, he welcomed every jeer and taunt. He turned what could have passed for just another postseason moment into a memory for everyone involved.

More than 20 years after Reggie Miller broke their hearts, Knicks fans get to develop another love-hate relationship with a villain in Trae Young.

Young isn’t the only NBA star that has taken on the classic heel persona. Joel Embiid has been doing it for longer and better.

Whether it's living in Andre Drummond's mind rent-free or even trolling the Philadelphia 76ers fans in commercials, Embiid has been at the forefront of heel-ish behavior for a long time. He is a big wrestling fan, after all. It should not have been a surprise that for this year's playoffs, he adopted the DX chop as his move to express sheer domination.


Heels are a necessary part of the wrestling ecosystem. Basketball provides enough drama that there is no need for a heel in every game, but players like Embiid and Young make games a whole lot more fun. They remind us that, at the end of the day, this is just basketball, this is just entertainment.

There's been an alarming trend of deplorable fan behavior around the league, most of it targeted at expressive athletes like Young and Embiid. All this villainy crowd jeering is a part of the game, but it should not result in twisted parasocial hate towards these athletes.

Go ahead and boo Embiid. The next time Young plays, reserve a little extra slander for your tweet when the Hawks lose. But let's not be racist, inflammatory, or despicable about anything. Calm down. It's just basketball.
Read Next
Features