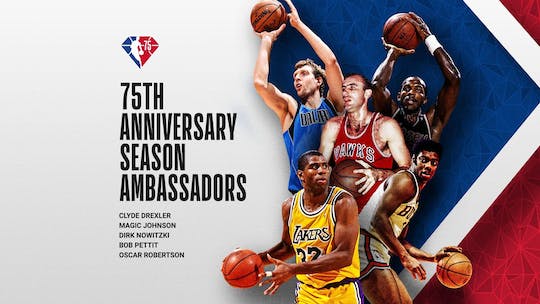 The National Basketball Association today announced that its 75th Anniversary Team, comprised of the 75 greatest players in league history, will be unveiled during special editions of TNT’s “NBA Tip-Off presented by CarMax” and ESPN’s “NBA Today” from Wednesday, Oct. 20 (PHT) through Friday, Oct. 22.

Twenty-five members of the team, representing a cross section of positions and eras from throughout the NBA’s rich history, will be announced on each of the three days. The team is being selected by a blue-ribbon panel of media and current and former players, coaches, general managers and team executives.

TNT will begin the unveiling of the 75th Anniversary Team on Wednesday at 6 a.m. during an extended edition of “NBA Tip-Off presented by CarMax” with the Sports Emmy Award-winning studio team of Ernie Johnson,?Charles Barkley, Shaquille O’Neal and Kenny Smith. The 90-minute pregame show will air prior to the network’s opening-night doubleheader featuring the defending NBA champion Milwaukee Bucks hosting the Brooklyn Nets (7:30 a.m.) and the Golden State Warriors visiting the Los Angeles Lakers (10 a.m.).

ESPN will take over the honors on Thursday, Oct. 21 at 3 a.m. when it announces 25 more members of the team during “NBA Today,” the network’s new daily 60-minute NBA show hosted by Malika Andrews, ahead of its season-opening doubleheader with the Boston Celtics facing the New York Knicks (7:30 a.m.) and the Denver Nuggets taking on the defending Western Conference champion Phoenix Suns (10 a.m.).

The final 25 members of the team will be revealed on TNT’s “NBA Tip-Off presented by CarMax” on Friday, Oct. 22 at 6 a.m., in advance of the network’s presentation of the Dallas Mavericks vs. the Atlanta Hawks (7:30 a.m.) and the LA Clippers vs. the Warriors (10 a.m.).

As part of “NBA 75,” the league’s celebration of its landmark 75th Anniversary Season, the NBA selected Naismith Memorial Basketball Hall of Famers Clyde Drexler, Magic Johnson, Bob Pettit and Oscar Robertson, as well as 14-time NBA All-Star Dirk Nowitzki, to serve as ambassadors for the 2021-22 season.  Representing different eras of the league’s history, the ambassadors will make appearances throughout the 75th Anniversary Season and have a significant presence at NBA All-Star 2022 in Cleveland.

For the latest details on NBA 75 celebrations, including player profiles on each member of the 75th Anniversary Team after it is announced, visit NBA.com/75 throughout the 2021-22 season.