The former seven-time All-Star is retiring because of an irregular heartbeat that was recently detected. 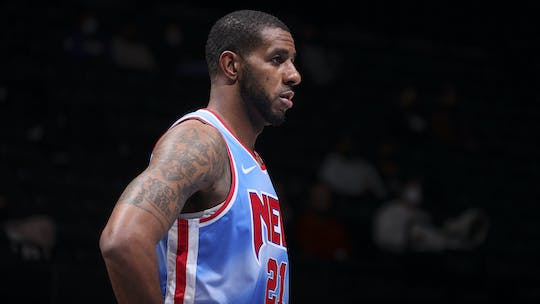 Brooklyn Nets big man and 15-year NBA veteran LaMarcus Aldridge announced today that he is retiring from the NBA. In a post via his Twitter account, Aldridge wrote that he was retiring because in the last game he played, he was dealing with an irregular heartbeat.

“My last game, I played while dealing with an irregular heartbeat. Later on that night, my rhythm got even worse which really worried me even more,” Aldridge wrote. “The next morning, I told the team what was going on and they were great getting me to the hospital and getting me checked out.

“Though I’m better now, what I felt with my heart that night was till one of the scariest things I’ve experienced. With that being said, I’ve made the difficult decision to retire from the NBA. For 15 years, I’ve put basketball first, and now it is time to put my health and family first.”


Nets GM Sean Marks issued a statement in the wake of Aldridge’s announcement that read, in part: “The Nets organization fully supports LaMarcus’ decision, and while we value what he has brought to our team during his short time in Brooklyn, his health and well being are far more important than the game of basketball. We know this was not an easy decision for him, but after careful consideration and consultation with numerous medical experts, he has made the best decision for him, his family and for his life after basketball.”

Statement from our GM Sean Marks on the retirement of LaMarcus Aldridge: pic.twitter.com/3WKRJgAmpn


Aldridge played in five games with the Nets, his last being a 126-101 loss to the Los Angeles Lakers on April 10.  He started that game — as he did all his other previous games with Brooklyn — and finished with 12 points, three rebounds and two assists in 22 minutes.

The Nets added Aldridge on March 28 as a free agent after the San Antonio Spurs bought him out of his deal.  Aldridge and the Spurs had agreed to mutually part ways in early March, with plans to waive him if they could not trade him before the March 25 NBA trade deadline.

His move to the Nets bolstered a squad already stocked with talent in All-Stars Kyrie Irving, Kevin Durant and James Harden. Aside from adding Aldridge, the Nets also picked up former All-Star big man Blake Griffin via the buyout market to fill out a talented frontline.

The 35-year-old Aldridge was in his sixth season with the Spurs after playing his first nine NBA seasons with the Portland Trail Blazers. This season with San Antonio, the former No. 2 overall pick in the 2006 draft played in 21 games this season, averaging 13.7 points and 4.5 rebounds in 25.9 minutes — a career low in rebounds and his fewest points and minutes since he was a rookie.

In Aldridge’s last three appearances before the All-Star break, Popovich moved him to the bench. Prior to that, he missed six games over three weeks with a hip injury and then sat out the last two games before the break with a stomach ailment.

Blazers president of basketball operations Neil Olshey issued a statement via the team on Thursday that said, in part: “LaMarcus had a storied NBA career and his time as a Trail Blazer will always be remembered fondly.

During his nine seasons in Portland, LaMarcus battled through multiple injuries and health concerns but never once allowed them to affect his commitment to his teammates and coaches … He will go down as one of the best players in the history of the franchise and while it is sad to see his career cut short, he will always be a member of the Trail Blazer family and we wish him the best in all future endeavors.”