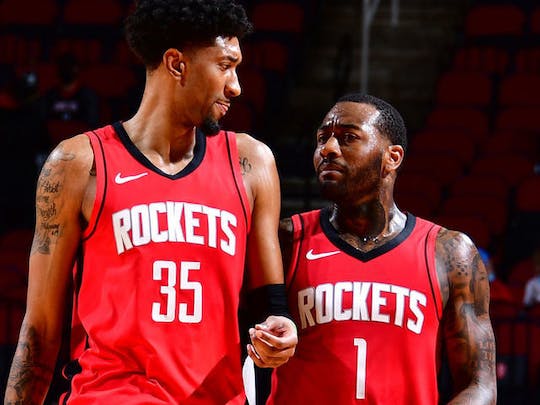 To seize everything you ever wanted

Would you capture it

Or just let it slip?

Because of all the player movement in the offseason, there are times when players find themselves with a chance to make a statement, to show the whole world what kind of player they really are. Will they take it and run? Or will they sink back and let the league wash over them?

Those lines by Eminem in his iconic hype track “Lose Yourself” hold true, especially for these five players, heading into the 2022-2023 NBA season.

When Wood signed with the Houston Rockets back in 2020, he probably envisioned being force-fed shots by an All-NBA level player. Catching lobs and popping out for 3s alongside James Harden was the easiest path to an All-Star call-up. Unfortunately for Wood, their partnership never really got off the ground. After Harden was traded, Wood was stuck playing with a tanking team and his numbers suffered because of that.

Not all players get a second chance at playing with another All-NBA talent but Wood got exactly that when he was traded to the Mavs in the offseason. Now, he can catch lobs and pop out for 3s next to Luke Doncic.

Wood can propel himself into the conversation of the best big men in the league if he can flourish in Dallas. Make no mistake, though, playing for Coach Jason Kidd and with Doncic demands a certain level of toughness from both ends of the floor. If Wood can bring that, he can not only make a name for himself, but he can also make a real impact on the team, helping them go on another deep playoff run.

The San Antonio Spurs have finally accepted that for them to continue their championship tradition, they have to get worse before they can get better. That’s why they traded away their All-Star, Dejounte Murray, and are now in full tank mode.

With Murray gone, Johnson is now the best player in San Antonio. Johnson has steadily improved his play in the three seasons he’s been in the league. This upcoming season feels like the best chance for him to prove that he’s part of the Spurs’ long-term plans.

With expectations at an all-time low and no real competition at both forward spots, Johnson can feast on an unlimited opportunity. He can drastically improve his scoring and playmaking numbers easily. The true challenge is for him to prove his worth as a leader of the team. To do that, he has to show Gregg Popovich that he’s willing to do the dirty work on the other end of the floor. That’s where he’s still lacking so far. If he can become a guy whose game leads by example, it won’t be ridiculous to think of Johnson as a franchise cornerstone next to a towering French phenom.

The Utah Jazz don't have championship aspirations. They don’t have unrelenting fans breaking down his every move. He doesn’t have to worry about the GOAT conversation, his coach being fired after a loss, or messing up in front of celebrities.

Horton-Tucker is now free to play the free-flowing type of basketball he plays during preseason or Summer League games. That’s when he’s at his best, playing next to players with the same age as him – players with fresh legs that will run alongside him or continuously attack the defense with cuts and movement.

Playing with the rebuilding Jazz is basically an 82-game Summer League season. All THT has to do now is ball.

Last season was already a breakout season for Simons. With Damian Lillard out due to injury and McCollum traded away to New Orleans, Simons took over for the Portland Trail Blazers. He shed his sixth man role and was the full-time lead guard to close last season. His numbers took a massive leap forward, averaging career-high numbers across the board.

This coming season, Lillard is back. Unlike last season, Simons won’t be heading back to the bench. Instead, he is firmly entrenched as the starting shooting guard next to Portland’s superstar.

While the touches won’t be as plentiful as last season, Simons’ life becomes easier playing next to Lillard. He has a playmaker that can create easy shots for him, while also taking away some of the defensive focus he faced last season. That means Simons can play off the ball, helping improve his offensive efficiency and defensive focus. When Lillard sits, Simons can take over once again as the main option.

Basically, the young guard is now the new McCollum. Which isn’t a bad thing, considering Dame’s former partner was a borderline All-Star in the West.

After a disappointing run with the Washington Wizards and a nearly non-existent run with the Rockets, Wall now has a great chance with the LA Clippers to remind everyone just how good he still is. In his prime, he was a breathtaking talent that blitzed defenses with endless forays to the hoop. He was also a gifted playmaker, athletic defender, and passionate leader. What he wasn’t known for was being a playoff winner.

Wall can change all that playing alongside Kawhi Leonard and Paul George. LA’s wings are the best teammates Wall has ever had in his career. He doesn’t need to do the heavy lifting this time around. But that doesn’t diminish the impact he can bring to the Clippers.

The one thing missing from Leonard and George’s previous playoff runs together (besides health) was having a legitimate creator to ease their burden. If Wall can return to the kind of player he was with the Wizards, that ticks off a huge box for the Clippers. They now have three legitimate All-Stars they can trot out, making them the favorites to win next year’s championship.