Jokic was injured after knocking knees with Jazz center Rudy Gobert late in the 1st half of Wednesday's game in Utah. 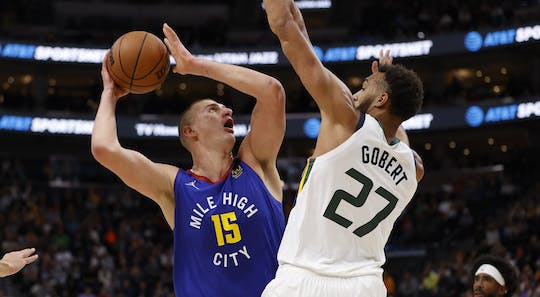 A dominant performance by reigning Kia NBA MVP Nikola Jokic was cut short by a right knee contusion suffered late in the first half of Wednesday’s road game at Utah.

The Nuggets superstar went down in obvious pain and had to be helped off after knocking knees with Jazz center Rudy Gobert with 1:54 remaining in the second quarter. Jokic tested his knee during warmups for the second half but was unable to return.

The Nuggets hung tough without their anchor, leading briefly in the fourth quarter before the Jazz poured it on en route to a 122-110 victory.

Jokic completely dominated the Jazz up to that point, amassing 24 points, six rebounds and six assists in just 15 minutes.

While he isn’t sure when Jokic will return, Denver coach Michael Malone said he didn’t think the injury is “too, too” serious. The Nuggets face Dallas at home on Friday.