With a record $264 million supermax contract extension, the 2-time Kia MVP is locked in with Denver through the 2027-28 season. 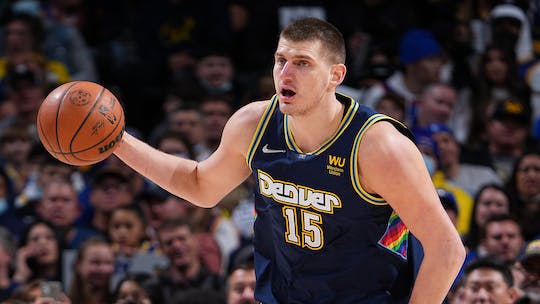 DENVER (AP) — Nikola Jokic has gone from draft pick No. 41, to two-time Kia MVP, and now the holder of the largest contract in NBA history.

Jokic signed a five-year, $264 supermax extension with the Denver Nuggets.

The team announced the agreement on Friday.

It begins with the 2023-24 season and continues through 2027-28 — when, should Jokic exercise his option for that season, he could make roughly $60 million.

The Serbian star has undergone a meteoric rise in his seven NBA seasons, all with the Nuggets. He became an All-Star in his fourth season and has stayed at that level since, plus won MVP in each of the last two seasons after averaging 26.4 points in 2020-21 and 27.1 points this past season.

And the MVP votes haven’t exactly been close; Jokic has been atop roughly 75% of the ballots cast for that award over the last two seasons.

The 27-year-old Jokic is coming off one of his finest seasons — and creating a new category because of it. He’s the first NBA player to eclipse 2,000 points, 1,000 rebounds and 500 assists in a season.

Jokic also averaged 13.8 rebounds and 7.9 assists for a Denver team that was missing two max players in Jamal Murray (ACL recovery) and Michael Porter Jr. (back). He helped the Nuggets to a 48-34 record and a No. 6 seed in the West, where they lost to the eventual NBA champion Golden State Warriors in the first round.

The organization has undergone big changes since the end of the season, starting in the front office with the departure of president of basketball operations Tim Connelly to division rival Minnesota.

His vacancy created more responsibility for Nuggets general manager Calvin Booth, who orchestrated a trade Wednesday that sent guards Will Barton and Monte Morris to the Wizards for Kentavious Caldwell-Pope and Ish Smith. They team also dealt JaMychal Green and a 2027 protected first-round draft pick to Oklahoma City for Peyton Watson and two future second-round picks.

Provided everyone’s healthy, it means a lineup that could look like this: Murray, Caldwell-Pope, Jokic, Aaron Gordon and Porter.

To think, Jokic was taken in second round of the 2014 draft — while a Taco Bell commercial aired. Not that he even knew that day.

“I was sleeping,” Jokic recently cracked in a Zoom call from Serbia.

The player nicknamed “Joker” is one of a kind in the way he plays and even in his demeanor. He’s the low-key sort of star whose hobbies include hanging out at his horse stable in Serbia. When he won his second straight MVP, he rode to the barn on a two-wheeled cart pulled by his horse.

As the 13th player to win back-to-back NBA MVP awards, his name will be linked with basketball greats such as Michael Jordan, Magic Johnson, Moses Malone and Kareem Abdul-Jabbar. Should he three-peat, Jokic would be in the company of Larry Bird, Wilt Chamberlain and Bill Russell.