Nikola Jokic: The center of attention

Nikola Jokic is changing the game and, at the same time, bringing back the value of the center position. 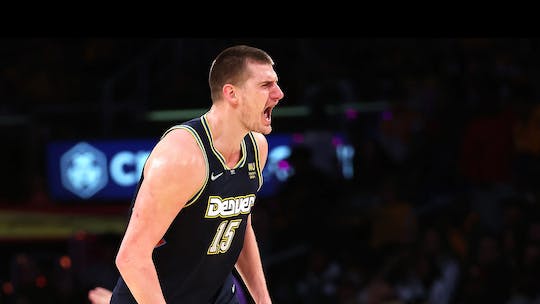 The last center to win the MVP award before Nikola Jokic did last season was Shaquille O’Neal, a full 22 years ago. Back then, O’Neal was a dominant force like no other player in his era. He bulldozed his way into the paint, ramming through multiple defenders to get his points. He just blasted away anyone that stood in his way. O’Neal had gravity to his game that bent defenses and opened up opportunities for the rest of his teammates. He commanded double teams because leaving one guy to defend him was inhumane.

After O’Neal, the next player to come along with a similar kind of gravity was Steph Curry. Because he was such an unbelievable shooter, Curry was considered a threat as soon as he stepped on the court. He never stopped moving on offense, constantly ducking and zipping past screens to get open for shots. That meant defenses were also always on the lookout for him. Even if he wasn’t scoring, Curry’s mere presence already created so many opportunities for the rest of his teammates.

Nikola Jokic has the same kind of gravity that O’Neal and Curry have.

After a 20-year drought, centers are back! pic.twitter.com/id3CE44rd5

Jokic’s offense in the post is just as effective as O’Neal’s. While he’s not as physically imposing as Big Diesel, the Joker gets the job done with his skill. He can score at will in the paint with an array of pivots, fakes, scoops, and flips. His herky-jerky style may be odd, but the end result is still two points on the scoreboard.

The gravity O’Neal had in the post, Jokic also has. In previous seasons he looked for teammates to pass to first, In his MVP seasons, if he sees an opening to eat, Jokic will put on a bib and go to work. That presented teams with a dilemma. Let Jokic drop 40 on them or send a double team to limit his scoring?

If O’Neal was doubled, he would kick the ball out and repost. The fun begins when Jokic is doubled. As soon as a second defender is sent his way, the Nuggets begin an elaborate set of movements that will open up multiple options for their big man. Jokic sees plays as it happens and knows where to place his passes to manufacture the best shot available for his teammate. He then gets the ball to an open teammate with a creative, but deadly accurate pass. His highlight packages almost never consist of his own buckets. It’s usually filled with no-look flips or crosscourt rockets.

Jokic is also just as dangerous as the back-to-back MVP version of Curry. Jokic is a threat to make a play from anywhere on the court. Off a rebound, Jokic can toss a long bomb to a leaking teammate or bring the ball down like a point guard leading the break. He can hit outside shots off the pick-and-pop, face up and take his man off the dribble, or even side-step into a one-legged fader.

Jokic doesn’t need to scurry around the court to create shots for his teammates. He’s actually at his best when he’s nailed into one spot in the center of the half court, by the free throw line. From there he can watch a play progress and make the right play. Jokic attracts the attention of the defense because he can score or create from that spot. All he needs is one misstep by the defense. By the time an opponent realizes he’s lost track of his assignment, Jokic has already delivered the ball safely into that open player’s hands.

As a center, Jokic makes his living in the paint like all the other centers who won MVP before him. But just like the league, Jokic’s game also evolved past the paint. His skill allows him to play in the perimeter and contribute to his team winning in many different ways.

The Nuggets finished with 48 wins, one more than last year. He led the Nuggets to a better record without Jamal Murray and Micahel Porter Jr. the whole season. He didn’t fold under the heavy burden put upon his shoulders this season. He strapped the Nuggets on his back and took them back to the playoffs.

Jokic is still a traditional center that does most of his work down in the paint. But he’s also continuing to push the game forward. By winning two MVPs, he’s showing other big men like him what’s possible in this small ball era.

It’s poetic that Jason Kidd and Luka Doncic teamed up to eliminate the Phoenix Suns in this year’s playoffs.