No joke: Jokic’s MVP win is culmination of years of hard work

From being an unknown kid from Serbia to the league’s best player, Nikola Jokic’s MVP journey is inspiring. 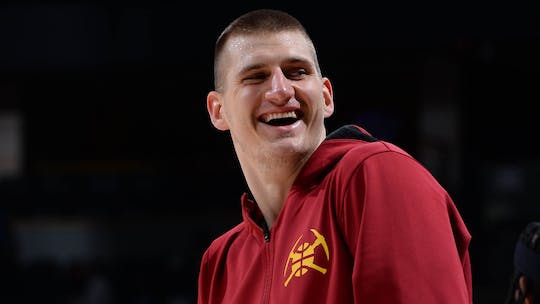 If you look at Nikola Jokic, he’s not your typical Most Valuable Player. He isn’t explosive the way Giannis Antetokounmpo is. He isn’t the shooter James Harden and Steph Curry are. He’s also not the Finals mainstay the way LeBron James is.

And yet, Jokic is the MVP who made history that will forever be attached to his name. Jokic is the first MVP not only in the Denver Nuggets’ franchise history but also the first player from Serbia to win the award. He is also the lowest draft pick (No. 41) to become MVP — a feat previously held by Steve Nash and Antetokounmpo who were both drafted no. 15.

However, the Serbian big man’s road to the NBA wasn’t easy, nor traditional.

By now, you probably know that Jokic is not the athletic center that usually flourishes in professional leagues like the NBA. His critics often noted his body build as one of the reasons he wouldn’t get to the very top.

But Jokic didn’t force himself to become a player he's not. People told him he was slow, so he unlocked the ability to be a good passer and eventual playmaker. Then they said he wasn’t explosive, so he learned how to outsmart his opponents despite the disadvantage. They also argued Jokic wasn’t a rim defender because he couldn’t jump, well, then he’ll just get stops even before they get to the rim.

The Joker’s basketball IQ is incredibly high, and he uses his disadvantages to build on other skills that aren’t traditional for players his size.

“I didn’t even think I would be in the NBA. My goal when I started to play basketball back home was to play in the EuroLeague because that was the closest top league to my country,” Jokic said in an interview after winning the award. “But when the Denver Nuggets drafted me, it was an opportunity for me to become an NBA player and I think I did a good job of using that opportunity.”

Even when he was drafted by Denver, people didn’t think he would excel the way he did now. In reality, being good locally doesn’t mean you will also be good in the NBA.

That’s why during Jokic’s rookie year, head coach Michael Malone just thought his contribution as a role player would be enough. All they expected from him was to be good at what he was asked to do and nothing more.

Then Malone realized that this guy is more special than anyone expected. His vision and ability to read plays on both offense and defense were well beyond his years. Jokic also made a conscious effort to take his diet and exercise seriously, putting him into great shape. The head coach knew that this guy was going to be special.

“I said to myself at that point, why am I fighting this? Let’s get Nikola back to playing his natural position. And more importantly, let’s make Nikola the centerpiece, the focal point of everything we do moving forward. Let’s grow with him,” Malone said.

And special, he became. By year six, Jokic was the Nuggets’ star player and leader on and off the court. He turned from a promising rookie to a franchise player, and he’s only 26.

This season, fans saw all the hard work he’s been putting in to make him the elite center he is today.

While several players average higher numbers this season, it was Jokic’s impact on his team that truly set him apart.

The Nuggets had an extremely slow start to the 2020-21 season. His second star, Jamal Murray, had a sloppy first few games, putting them towards the bottom of the Western Conference standings.

Things started to clear out by February and March, and by April their acquisition of Aaron Gordon made them a serious title contender again. Unfortunately, a few weeks later, Murray went down with an ACL which felt like the end of Denver’s race to the finals.

Jokic then shocked everyone and played even harder, securing them a spot in the playoffs. Now he’s led the Nuggets to the Western Conference semifinals.

The Joker’s journey is the ultimate NBA success story. From an unknown kid from Serbia to the league’s best player -- Jokic’s triumph has a greater impact on society.

His story inspires athletes who aren’t built in a traditionally “athletic” body to not give up on their dreams of making it to the big leagues. Jokic thriving in the NBA proves that players don’t need to be tall and shredded athletes to be great.

With hard work, perseverance, and a dash of luck, anyone can reach greater heights -- just like Jokic.

“It's not just a trophy, it's the whole journey. The trophy is just a moment, the journey is everything,” he said.