Nothing quiet about Kevin Garnett

Kevin Garnett is a Hall of Famer because he was an intense, loud, and fearless player who gave so much to the game. In every social setting, there’s always this one person who’s always turned all the way up, always the loudest, always at a hundred.

I am definitely not this person. This person is definitely Kevin Garnett. The intense, straight-from-high-school, intense, barking, 6-foot-11 (but towered over everyone as if he’s 7-foot-11) intense power forward who’s all about competing. And being intense.

He goes by a bunch of nicknames: The Kid, The Big Ticket, KG. As I type this, an involuntary snarl forms on my face and I try to resist the urge to pound the keyboard and type in all caps. That’s the KG effect. A mere mention of his name, a brief mental image of his face, and immediately you can lose your chill.

From his arrival as a hotshot 19-year-old picked fifth in the draft to an incoherent and weeping NBA champion screaming “Anything is possible,” the stories of KG read and sound like true-to-life horror. If, like me, you’ve been bullied at least once in your life, the concept of Kevin Garnett as a human is simply intimidating.

There’s that one story about his encounter with a rookie Joakim Noah, who worshipped KG growing up. After KG put on one of his moves on Noah, the rookie asked the vet if he could teach him the move. Of course not. Long story short, KG won’t take part in any teachable moment if you’re an opponent.

There’s another story where he dominated his coach’s son, a high schooler named Austin Rivers, in a not-so friendly game of one-on-one.

There’s a long list of KG-related altercations and a whole treasure trove of KG stories that expose his fiery, petty, no-holding-back, loud character. All are inspirational if you’re on his side, offensive if you’re not. But regardless of whichever side of the fence you’re on, you just can’t deny the magnetism of Kevin Garnett as a basketball player and as a person.

It transcends the accolades: champion, 15-time All-Star, nine-time All-NBA team, Defensive Player of the Year, only Timberwolves player ever to win MVP. It’s bigger than milestones: one of only three players in NBA history with 25,000 points, 10,000 rebounds, and 5,000 assists (Kareem Abdul-Jabbar and Karl Malone are the other two). 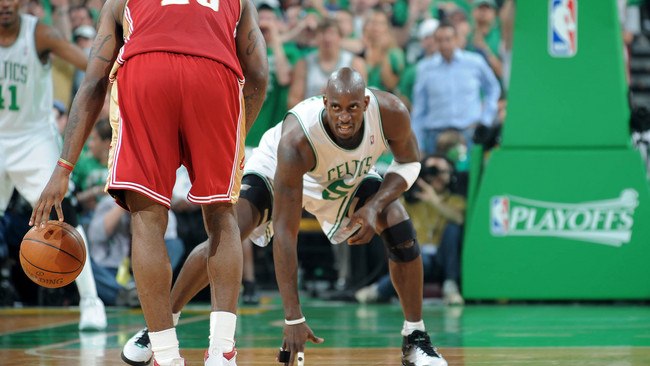 What KG brought to the game is much more than the unique skill set or versatility. He’s a culture-shifter, a disruptor. He’s the type to make loud noises, then back it up with even louder actions. He would say things like, “I’m ready for war” before a Game 7, then go on to drop 32 and 21. He would challenge those within his vicinity to be better, and bark at (sometimes literally) those who choose not to. He’s never afraid to tell it like it is.

My favorite Kevin Garnett tell-it-like-it-is moment is a postgame interview with the late Craig Sager. The Boston Celtics came back from a 27-point hole to win by eight. The game didn’t look pretty at all—there were a lot of broken shards of glass, heightened emotions, sweat. It was, in KG’s own words, a “bar fight.”

Before Craig could even formulate a question, KG had already uttered the words “bar fight” five times. He was sweating profusely, breathing heavily, and could not stand still. The pure love for the game oozing out of every pore in his body.

“When you’re down and you fight back, you got a reason to be proud of yourself,” Garnett told Craig.

Two decades I’ve watched him, it always felt like this: Kevin Garnett in a perpetual state of fighting back and being damn proud of himself.

It’s easy to be inspired by a person like this.

Behind all the barking, growling, mean-mugging, floor-slapping, and chest-pounding is a fighter who just won’t allow himself to stay down and be quiet. The Basketball Hall of Fame now has someone like that.
Read Next
Feature