This is the first time that both the top three and four of the top five finishers in voting for the Kia NBA Most Valuable Player Award are international players, with Jokic (Serbia), Embiid (Cameroon) and Antetokounmpo (Greece) comprising the top three and Doncic (Slovenia) joining them in the top five.  Jokic is the second European player to win the award more than once, joining Antetokounmpo, the MVP in the 2018-19 and 2019-20 seasons.

In his seventh NBA season, Jokic averaged 27.1 points, 13.8 rebounds, 7.9 assists, 1.47 steals and 0.85 blocks per game, setting career highs in each category except assists (second highest).  Jokic, who played 74 games and averaged 33.5 minutes, ranked sixth in the NBA in points, second in rebounds, eighth in assists, 12th steals and 33rd in blocks per game.  He led the league in total rebounds (1,019) and total defensive rebounds (813).  His career-high 58.3 field goal percentage was eighth highest in the NBA.

Behind Jokic, the Nuggets (48-34) qualified for the NBA Playoffs presented by Google Pixel for the fourth consecutive season.  With Denver trying to clinch a playoff spot late in the season, Jokic averaged 35.7 points, 16.3 rebounds, 7.4 assists and 2.14 steals in his final seven games.

The Nuggets selected Jokic with the 41st overall pick during the second round of the 2014 NBA Draft.  Last season, he became the lowest-drafted player to win the Kia NBA Most Valuable Player Award with the exception of three-time recipient Moses Malone, who was not selected in the NBA Draft.

Jokic will be presented with a special edition 75th Anniversary commemorative trophy today in celebration of the honor, gifted in addition to the Kia NBA Most Valuable Player Award trophy, which he will receive later.  The commemorative trophy, composed of a solid crystal basketball, features the NBA 75 logo 3D laser etched and suspended within its center.

The voting results for the 2021-22 Kia NBA Most Valuable Player Award are below.  The balloting was tabulated by the independent accounting firm Ernst & Young LLP. 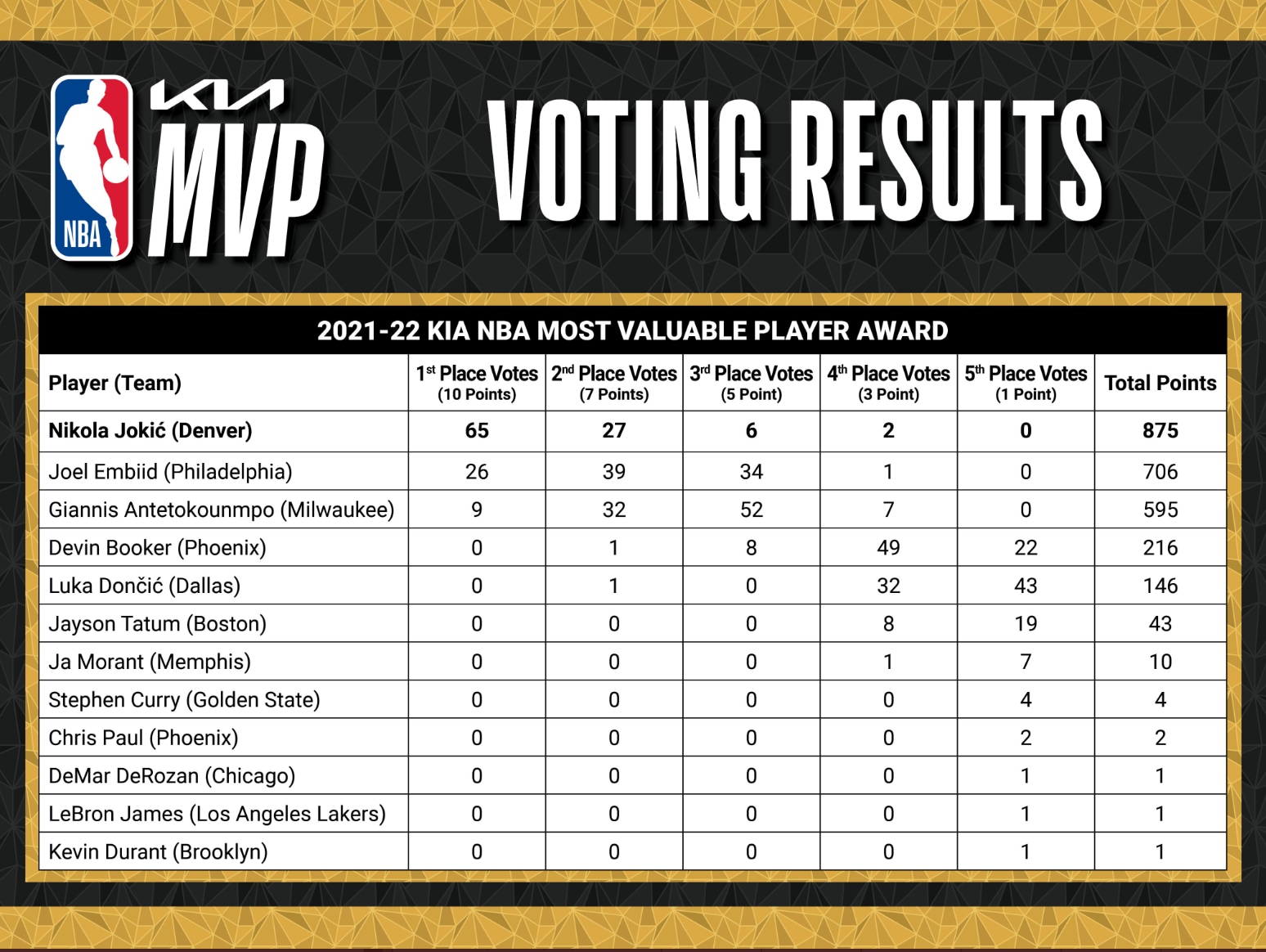 A year-by-year list of the Kia NBA Most Valuable Player Award winners:

Examining the Western Conference Finals matchup between the Warriors and Mavericks.