Fashion, music, and entertainment. Several NBA players are making the most of the offseason. 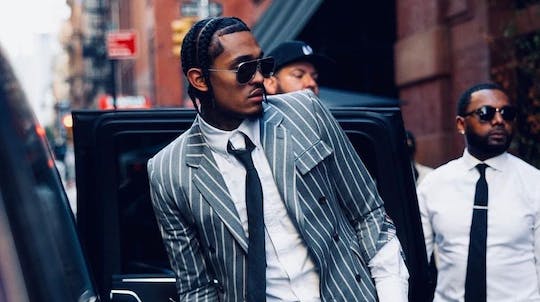 Partying at the wedding of the year, dancing in Drake’s new music video, attacking Rey Mysterio, and being lit at New York Fashion Week. The NBA stars are simply making the most of the offseason.

Here are the highlights:

Damian Lillard got married to his partner Kayla and instantly it was the party of the year. Among those who celebrated with the newlyweds were Snoop Dogg, Common, and some of Dame’s teammates.

Kawhi Leonard and dancing have no business being in one sentence, let alone in one video, but there he was in a new Drake music video putting on the moves.

Back in MSG like he never left 👀🥶@WWE x @TheTraeYoung pic.twitter.com/IuJVcSlchj

Trae Young was the perfect heel-type player to the New York Knicks in the last playoffs—hitting game-winners, trash-talking, and bowing to the crowd.

In an effort to outdo himself, Young made a return to Madison Square Garden as an actual heel. He got ejected for interfering in a match, further cementing his legendary status as a New York villain.

There’s no friendship more pure than the Tobi-Bobi duo. They recently played in a pick-up game with Jordan Clarkson, Trae Young, Aaron Gordon, and Adam Sandler.

When he’s not working on his flamethrowing skills on the court, JC is lighting it up in his ‘fits.

He was born for New York Fashion Week.

Kyle Kuzma is headed to Washington, but he also made a quick stop in New York to walk the runway.

When it comes to fashion though, Russell Westbrook will always be out for the crown. He went skirt one day then star-spangled hair the next.

Expect the tunnel to always be on fire wherever Russ is when the season starts.