On the Lookout: Booker, Suns hope to torch the surging Heat

The Phoenix Suns begin their four-game road trip with a battle against the surging Miami Heat. 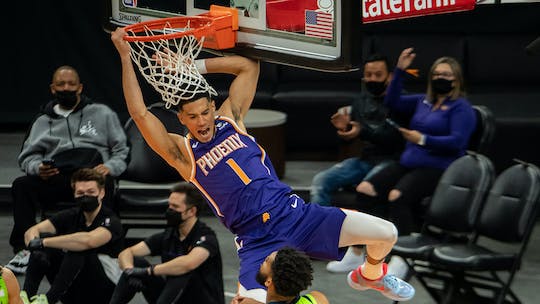 First and perhaps the most fun small detail is how perfect their logos are when placed next to each other. The Suns' logo is a basketball in an upward motion with rays jutting out in all directions, while the Heat's is a basketball turned fireball hurtling towards a hoop. On the NBA app, these logos look like they are about to collide on the matchup screen, a big unintentional design win.

Second and more importantly, both teams are playing incredible basketball. The visiting Suns are winners of eight of their last ten games and have shot up to second in the West standings. They excel on both ends of the court, currently ranked fourth in defensive rating and eighth in offensive rating.

Watching Phoenix is like watching a skilled pianist go through new sheet music. They play with the meticulousness of a Chris Paul-led team while still maintaining the flare of a young squad, thanks to Devin Booker.

In the past years, the Suns always struggled to find their spots and put away teams in the fourth quarter. Having Paul divvy up late-game possessions has eased the decision-making burden off Booker, which opened up better catch-and-shoot looks for him. Paul slows the game down tremendously, only choosing to go for transition opportunities when the Suns have a numbers advantage. Combine all these with Paul's great pick and roll synergy with Deandre Ayton and you get one of the best fourth quarter teams in the league. Phoenix is third both in fourth quarter and overall scoring differential (+3.3 and +6.6, respectively).

This is also a Phoenix team reaping the rewards of savvy Draft day moves with Mikal Bridges and Cam Johnson making an impact as versatile wing players. They've also squeezed the most out of a bench unit that includes under-the-radar Dario Saric, Cam Payne, and Jae Crowder.

The Suns are going to need all the toughness they can muster against the Heat, who are still surging after a slow start.

Going to the Finals last year did a lot to legitimize the Jimmy Butler-era Heat culture, but it didn't do much to help them this year. The short break between their Finals appearance and the start of this season aggravated some lingering injuries that the Heat stars were nursing. Coupled with COVID protocols, the Heat are probably the team most severely affected by the circumstances of the pandemic, next to the defending champions Los Angeles Lakers.

But the Heat are getting healthier as the season moves along. Butler, since returning from a two-week absence in January, has looked like an MVP candidate averaging 23.1 points, 8.4 rebounds, 8.0 assists, and 2.0 steals. Bam Adebayo, on the other hand, has been the constant force on both ends that’s keeping the Heat afloat. He has solid all-around norms of 19.2 points, 9.5 rebounds, 5.4 assists, 1.1 blocks, and 1.0 steals.

Miami still thrives in shutting down opponents, ranking second in defensive rating over their last 15 games. The offense has been a work in progress, but that should turn around when the Heat's other offensive options in Tyler Herro, Goran Dragic, and Kendrick Nunn find their consistent stride.

Expect this matchup to be a close grind between teams that work hard on defense. The Heat have struggled against opponents with shifty point guards, so look for Chris Paul to break out of a mini shooting slump. Also watch out for how the Heat will choose to match their other perimeter players. Booker has been awesome this season, but what's been most impressive is his torching of the league’s upper echelon defenders like Ben Simmons, Paul George, and Kawhi Leonard.

This game will be broadcast early but it should be worth that strong mug of coffee.