On the Lookout: Clippers' Leonard-George duo face the Nets' Big 3

<p>The West Conference leader will face the league's top-scoring team as the Clippers take on the Nets.</p> 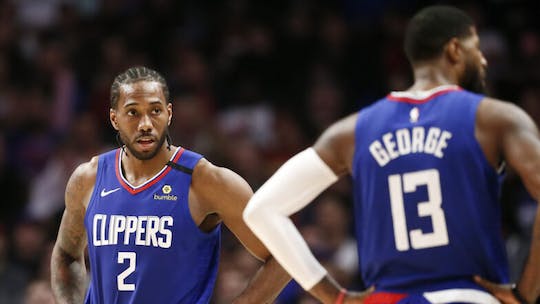 Great games are coming your way tomorrow, including the Clippers-Nets (8:30 AM on NBA League Pass) and the Warriors-Celtics (11:00 AM on NBA TV Philippines) showdowns.

The West Conference leader will face the league's top-scoring team as the Clippers take on the Nets. Predicted to be finals contenders at this point in the young season, both teams are filled with superstars bannered by the Clippers’ duo of Paul George and Kawhi Leonard and the Nets’ Big 3 of James Harden, Kyrie Irving, and Kevin Durant.

After winning eight of their last 10 games, Brooklyn suffered a heartbreaking loss in Washington as they bowed down to the Wizards, 149-146. Nets head coach Steve Nash expressed his frustration especially on the team’s defense, which allowed 48 points in the fourth quarter.

“The defense just wasn’t good enough, and I think everyone realizes that,” he said. “We obviously had many opportunities to win it down the stretch at the end of the game there but we probably didn’t deserve it with the way we guarded all night. Frustrating night. The level dropped, and we’ve got to pick it up.”

The Knicks’ defense could not contain the high-scoring Clippers, anchored by Leonard’s 28 points. George also made it big with 17 points, eight rebounds, and five assists. Reggie Jackson gave his team 18 points with a perfect record from downtown as he continues to play excellent basketball following the injury of Patrick Beverley.

Stacked with talented scorers, both teams will have to intensify their defense to survive the other. Proven by their last game, the Nets have a lot to learn when it comes to holding teams down. On the other hand, consistency will be key for the Clippers who are looking to ride on their winning momentum. George and Leonard seem to have finally gotten into the same wavelength, while Brooklyn is still trying to build some chemistry.

The battle between the Golden State Warriors and the Boston Celtics is another exciting match to watch. With key players injured, both teams need to find the right mix of players to emerge victorious.

Marcus Smart is reportedly out for a few weeks as he nurses a Grade 1 calf strain. The Warriors are also handicapped following an injury to their rookie James Wiseman. He is set to be reevaluated for the sprained wrist that he sustained in their previous game.

"It's a concern any time you lose anybody for any stretch of time, especially a guy that's in the rotation, but we'll figure it out and injuries are obviously a part of every season. No matter when they come, you just gotta be able to adjust," the Warriors’ Stephen Curry said.
Read Next
News