On the Lookout: Jazz and 76ers collide in titanic clash

It's automatically a must-watch when the West and East Conference leaders face off. 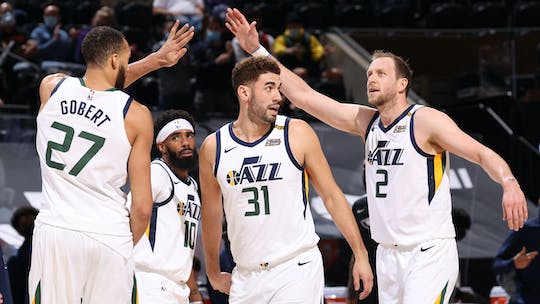 If you’ve ever wondered how Godzilla vs. Kong would look like if they took their battle to the basketball court, then the upcoming stellar matchup between the Utah Jazz (22-5) and the Philadelphia 76ers (18-9) is probably the closest you’ll get.

The Quin Snyder-helmed Jazz have simply been on a tear, winning 18 of their last 19 games to not only shake the league standings-wise, but also shake off naysayers, forcing them into quiet introspection. At this point, it is no longer delusional to ponder, “Are the Utah Jazz the best team in the league?” They’re moving the ball at a pace and efficiency that would make Gregg Popovich smile and they’re locking down teams reminiscent of the ‘04 Detroit Pistons.

“They've been together. It just looks fun. Like, when I watch them play, it looks fun. It looks easy. It looks simple,” said Giannis Antetokounmpo, whose Milwaukee Bucks already fell victim to the Jazz’s enjoyable yet devastating style of play twice this season. Philadelphia will be Utah’s biggest test yet.

The Sixers have lost two games in a row, but are still sitting atop the Eastern Conference standings. Unlike Utah’s equal opportunity offense, Philadelphia relies heavily on Joel Embiid. The Sixers go where Embiid goes. Fortunately for Sixers Nation, Embiid is currently on a one-way track to dominating the season. His numbers reek of MVP: nearly 30 points on 54 percent shooting, plus 11 rebounds and a block per game.

For Utah, Donovan Mitchell leads the scoring with 24 points per game, but any other Jazz member from Rudy Gobert to Jordan Clarkson to Bojan Bogdanovic can pick up the scoring slack. In their recent win against the Miami Heat, Utah showed that even on a cold shooting night (12-of-46 from the 3-point line), they can still pull off a win through their lockdown defense.

How that defense holds up against a beast like Embiid is enough reason to pin this game as a must-watch (10:00 AM on NBA TV Philippines), apart from the obvious top-tier matchup between the league’s conference leaders. This will be Godzilla vs Kong, minus the destruction of humanity. There could be explosions, sure, but only because that’s what usually happens when superstars collide.
Read Next
News