On the Lookout: Lakers hope to repeat against Jazz in rematch

After escaping in overtime last Sunday, the Lakers are looking to grab another home win against the league-leading Jazz. 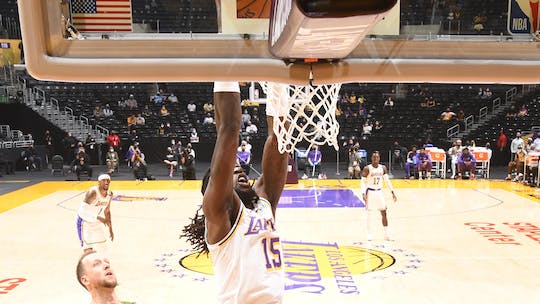 The rematch between the Los Angeles Lakers and the Utah Jazz is happening on Tuesday at 10:00 AM. Catch the game live on NBA TV Philippines on Cignal or online via NBA.smart.

The Lakers won their first matchup last Sunday in dramatic fashion, outscoring the Jazz 17-5  in overtime. Andre Drummond made a significant impact with 27 points, eight rebounds, and three assists in 30 minutes of play. Kentavious Caldwell-Pope and Dennis Schroder had 25 apiece, with 13 rebounds and five assists combined.

Unfortunately, most of these big contributors are not 100 percent for the rematch. Drummond (right big toe contusion) and Schroder (right foot infection), along with Marc Gasol (volar plate fracture, left pinkie finger) and Markieff Morris (left ankle sprain) have suffered injuries that might sideline them for their next game. This leaves KCP and Kyle Kuzma as the only players from their previous starters who are sure to suit up.

There’s also the long-time absence of LeBron James and Anthony Davis to go with that. Lakers head coach Frank Vogel told reporters that AD has been cleared for full on-court activities, but he’s unlikely to return against the Jazz.

With a current record of 35-22, the Lakers are still assured of a spot in the Top 6, but that doesn’t mean that they have their work cut out for them, especially with many of the players dealing with various injuries.

Meanwhile, the Jazz have a lot of adjustments to do.

With Donovan Mitchell still out from a right ankle sprain, the Jazz need to figure out a way to fill the void left by their star guard who’s averaging 26.4 points, 4.4 rebounds, and 5.2 assists per game.

Mitchell was replaced by Jordan Clarkson, the frontrunner for the Sixth Man of the Year award, who embraced the challenge by dropping 27 points against the Lakers. This performance was way above his 17-point average, but it seems like this won’t be enough to grab wins against powerful contenders like the Lakers.

Rudy Gobert and Mike Conley were also unavailable last game due to mild knee issues. They relied heavily on their second unit including Joe Ingles, Ersan Ilyasova, and Bojan Bogdanovic, who were all spectacular despite the loss. Gobert and Conley are listed as probable for the rematch.

While their league-best record (42-15) is surely enough to propel them into the playoffs, Mitchell’s indefinite absence might cause the Jazz to slide down the standings. Of course, the team would want to secure a home court advantage in the next round, but playing an injured superstar for the sake of staying at home is not an option for veteran coach Quin Snyder.

The rematch between the Lakers and the Jazz is expected to be as interesting as their first encounter. Whether or not it will end in another overtime is something that the fans have to see for themselves.