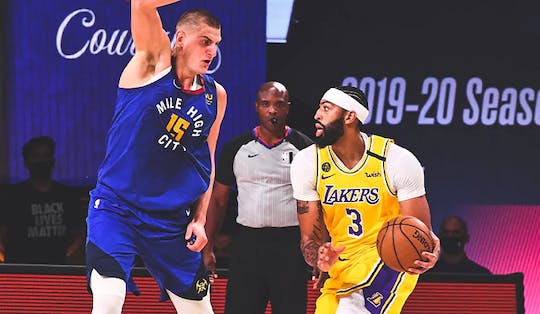 It’s a five-game Friday in the NBA featuring a rematch of last season’s Western Conference Finals as the defending champions Los Angeles Lakers take on the Denver Nuggets (11:00 AM on One Sports).

The Lakers have looked every bit like the championship squad we know they are, sitting currently in third place in the West with a 16-6 card. They are fresh from a 107-99 victory on the road against the Atlanta Hawks, putting their road record at 12-2, which is the best in the NBA. Anthony Davis led the way with 25 points and three blocks, while LeBron James saved the best for last, scattering eight points all in the final two minutes to record another well-rounded performance of 21 points, nine rebounds, and seven assists.

With two straight wins, the Lakers have seemingly shaken off remnants of their back-to-back losses to the Philadelphia 76ers and Detroit Pistons. The Lakers’ solid defense returned, as they held the Boston Celtics and the Hawks to an average of 97 points after surrendering 107 in each of their two losses. The impressive play of their supporting cast, led by Montrezl Harrell and Dennis Schroeder, has been key to the Lakers’ wins. Harrell racked up 19 points on 8-of-9 from the field, while Schroeder played well against his former team, tallying 16 points, three rebounds, and three assists.

“The group plays hard and they're scrappy defensively," said Davis. “That group is a special group. And it's our job to come in when that group does its job to finish it off for them and secure the victory."

Davis and James will definitely need all the help they can get when the red-hot Nuggets visit the Staples Center. Coach Mike Malone’s squad is fresh off a four-day break, as their supposed game against the Pistons was canceled due to COVID-19 protocol. In their last battle against the league-leading Utah Jazz, MVP candidate Nikola Jokic erupted for a career-high 47 points, highlighted by 33 points in the first half alone. His stellar performance led the way for the Nuggets’ 128-117 win over the Jazz, pushing their record to 12-8.

The Nuggets have been impressive as of late, winning six of their last seven outings. Jokic has been sensational all season long, posting 26.8 points, 11.8 rebounds and 8.6 assists per contest. Jamal Murray has also elevated his game as of late, averaging 18.9 points, 4.0 rebounds, and 4.4 assists.

The Nuggets should have no shortage of motivation to face off against the Lakers, the team that ended their Cinderella run inside the NBA Bubble in Florida. After dramatic series wins against the Jazz and the LA Clippers, they ran into a LeBron and Anthony Davis-sized buzzsaw in the conference finals, as they were defeated in the series 4-1.

Can the Nuggets get a measure of revenge against their Western Conference foes?
Read Next
Feature