On the Lookout: Lakers take on Raptors in tough playoff chase

Coming off back-to-back losses, the Lakers are hoping to put an end to a skid that caused them to slide out of the top 5 in the West. 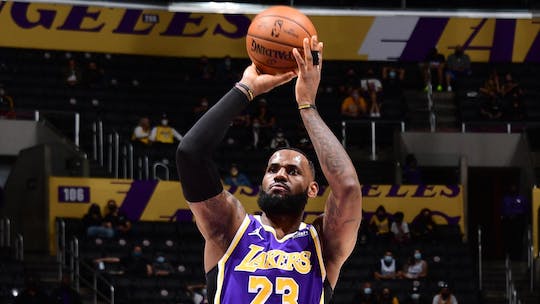 Down to the final stretch of the season and the Los Angeles Lakers are only now getting healthy. Lakers fans are feeling the familiar panic of end-of-semester requirement cramming and for good reason. The defending champs have only gotten back their two stars in LeBron James and Anthony Davis, who both missed more than a month of action due to separate injuries.

Now with just nine games left in the season, the Lakers have to start winning games as they’re in danger of falling into the play-in tournament with the Portland Trail Blazers and Dallas Mavericks hot on their heels. All of that pressure plus they have to find a way to develop chemistry with the new pieces added since LeBron and AD went down.

Tomorrow’s game against the Toronto Raptors at 10:00 AM on One Sports could prove pivotal for the Lakers' postseason destiny. A healthy Lakers squad is still the consensus favorite to make it out of the West. But going through the play-ins then having to face the top teams in the West for three consecutive rounds could prove too much for a team that's barely played together this season. There’s only been one team seeded sixth or lower to win the championship – the 1995 Houston Rockets. Although that team had its own internal issues and midseason roster shifts to deal with, they entered the playoffs with their stars in Hakeem Olajuwon and Clyde Drexler in top shape.

The Lakers season is coming down to LeBron James' capability to defy Father Time once again. Coming off a gruesome ankle injury, the King only has 10 games to see if he can regain form and make the Finals for the 10th time in 11 seasons. Now at age 36, James also has to prove that he has regenerative powers, after proving that he could win a title in Cleveland, beat the best regular season team ever, revive a legacy franchise way past its glory days, and successfully film a Space Jam reboot in the pandemic. AD isn't as old, but his history of minor lower body injuries compounded by this recent calf injury leaves a lot of questions if he can turn into the two-way beast that he was in the playoffs last year.

Adding Andre Drummond and Ben McLemore has given the Lakers a boost while their stars were out, but the Lakers now have to figure out how both of them fit with a complete lineup. If there's any boon from all this gloom, it's that the depleted Lakers maintained their spot on top of the defensive rating rankings even if their offensive rating plummeted to the bottom half of the league.

The Lakers aren’t facing a pushover in the Toronto Raptors. Playing away from their homecourt all season and dealing with injuries has severely limited the Raptors, who are most likely going to fall out of the postseason picture.

Still, this banged up iteration of Toronto has played some frisky basketball recently. With both Kyle Lowry and Fred VanVleet going in and out of the lineup to rest nagging injuries, Malachi Flynn has stepped up and shown his value as a reliable ball handler and scorer. Khem Birch, who the Raptors picked up off waivers, has provided a much-needed frontcourt presence with Chris Boucher suffering a knee injury. The Lakers also need to find ways to contain the energetic duo of OG Anunoby and Pascal Siakam, who could prove to be matchup problems for the Lakers' wings.

No matter who are available for them tomorrow, the Raptors are surely going to push the Lakers to the limit. Coming off close losses against the Brooklyn Nets, Denver Nuggets, and Utah Jazz, the Raptors could finally break through and have the Lakers as their upset of the season. Despite their 26-38 record, the Raptors are one of the tougher teams to beat with their eccentric coach Nick Nurse. They always have something unique up their sleeves for certain matchups, so fully expect a couple of zone defenses or ultra small lineups tomorrow.

The Lakers (36-27) are tied with the Mavericks for the fifth seed and are only one game ahead of the Blazers (35-28) for the seventh seed. At this point, no matter where the Lakers end up on the standings, they are going to face a top Western Conference team in the first round. All their remaining games are going to be a rush to develop some sort of chemistry. Starting tomorrow, the Lakers are on a tight race to the postseason.
Read Next
News

The All-Stars each led their squads to winning records in Week 19.