On the Lookout: LeVert set to face former team in Pacers-Nets matchup

Caris LeVert, who had been stellar for the Pacers in his first two games back from surgery, is about to take on his former team as the Nets head to Indiana. 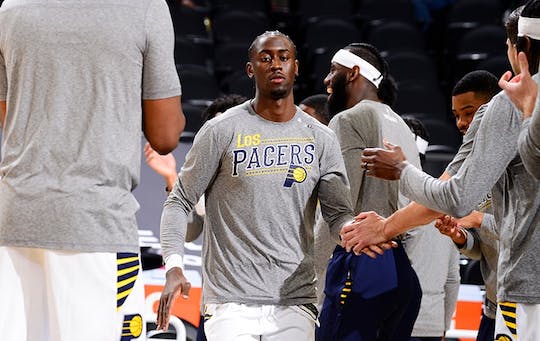 The last time the Brooklyn Nets and the Indiana Pacers met a month ago, Kyrie Irving woke up and chose buckets. He hung a nasty 35 points (a perfect 17-of-17 from the line), hitting contested fadeaways and carving up Indiana’s interior defense.

The Nets controlled the game from the start. It was one of those games where everything just clicked for Brooklyn, and Indiana had no choice but to play catch up, throwing desperate attempts to put a lid on Kyrie’s explosion. They failed, and the Nets won by 10.

What was different then? A lot. First, the Nets were adjusting to life without Kevin Durant when they faced the Pacers in February. KD nursed a hamstring injury, briefly appeared for a Golden State Warriors meetup, then haven’t played a game since.

The Pacers, meanwhile, were missing Caris LeVert, who was still recovering from a cancer surgery then. LeVert was key to the league-shaking, four-team deal that sent James Harden to Brooklyn.

In tomorrow’s rematch (7:00 AM on NBA TV Philippines), LeVert will play in his third game back since the surgery. He has picked up where he left off, scoring 13 points in 27 minutes in his Pacers debut versus the Phoenix Suns. He followed it up with 17 points in a loss against the Denver Nuggets.

The Pacers are in the process of tinkering with lineups and combinations now that LeVert is back. The Nets, on the other hand, have done well without KD, having won 13 of their last 14 games.

The Pacers are rejuvenated and will try to avenge their February loss in Brooklyn. But in the backdrop of it all is a reunion of sorts for the Nets and their beloved LeVert, whose character on and off the court endeared him to his teammates.

Irving, after their game against the Pistons, said he rushed home just to catch LeVert’s first game back from surgery. He doesn’t need to wait long to see his former teammate face-to-face on the court.

“Going back and seeing him is always an honor, like I said. And it's even better to go and compete against him, because I know he's going to give us his best,” Irving said.
Read Next
News