Will a red-hot VanVleet show up against the Nets? Leonard-George vs Tatum-Brown, who's going to win? 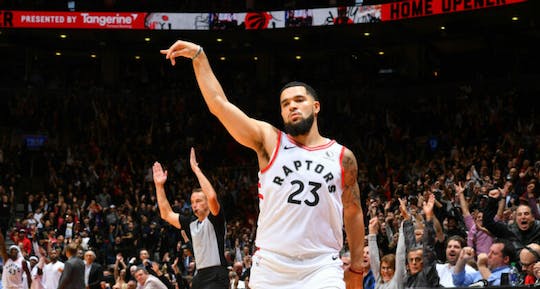 If history is any indication, then the game between the Toronto Raptors and the Brooklyn Nets (8:30 AM on TV5) will be quite interesting. Not that these two teams have a deep-seated rivalry. The only thing there—and it’s quite a stretch—is that Kevin Durant will face the Raptors for the first time since Game 5 of the NBA Finals, when he tore his Achilles, and in the process tearing apart the Bay Area dreams of the Golden State Warriors. No, it’s not that.

One should only look to a couple of days ago when the Raptors’ own version of new hope, Fred VanVleet, made history by dropping a franchise-high 54 points on the Orlando Magic. That same game day, Brooklyn’s sometimes eccentric, always electric Kyrie Irving scored a season-high 39 against the Los Angeles Clippers. So there’s that: look out for an exciting battle between two bucket-hungry point guards.

Then there are the other stars. In their previous games, Kyle Lowry and James Harden both notched a triple-double to complement their respective point guards. Both the Raptors and the Nets are also coming off wins, but that’s where the similarities end. Toronto, despite winning their last two games, still hover below .500 while Brooklyn is way up there in the Eastern Conference standings, just sitting under the Philadelphia 76ers and the Milwaukee Bucks.

VanVleet won’t likely breach 50 for the second consecutive game, but it will be fun to see if his shooting hand is still burning. A stacked Nets won’t likely fall to a struggling team, but remember what happened versus the Washington Wizards?

Another game to look out for is the dynamic duo duel between the LA Clippers and the Boston Celtics (11:00 AM on NBA TV Philippines). On one side is the Kawhi Leonard-Paul George pairing that has propelled the Clippers to second in the West (17 wins, 6 losses). On the other, the real-life version of the "Spider-Man pointing at Spider-Man" meme in Jayson Tatum and Jaylen Brown.

No guarantees on how this game will go as the Clippers are still tinkering with their new support system for Leonard and George, as well as adjusting to life without Pat Beverley who’s out with a knee injury. The Celtics, on the other hand, are still on a climb to the top of the East (11 wins, 9 losses) and trying to get comfortable with their roster that is not yet in full capacity.

The only thing for sure is that this is an elite matchup featuring two elite teams with big stars. Where big stars go, big moments follow. These moments may include Tatum submitting another entry in his bid for MVP and Leonard showcasing his efficiency against an unstable Celtics defense.