On the Lookout: Nets take on 76ers in battle of East powerhouses

Brooklyn and Philadelphia, the two top teams in the Eastern Conference, will collide on Thursday (PHT). 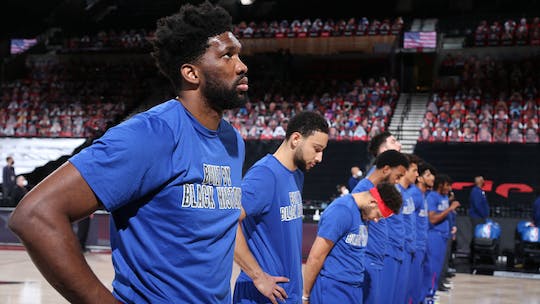 It’s going to be a gigantic clash in the East when the Philadelphia 76ers take on the Brooklyn Nets on Thursday, 7:00 AM on NBA TV Philippines and via NBA.Smart.

Since Joel Embiid got back in the mix, the Sixers has gone 4-1. Embiid has been averaging 28 points and eight rebounds since his return, and when he is making buckets, the team usually wins. In the loss to the New Orleans Pelicans, the MVP candidate only had 14 points.

Meanwhile, Ben Simmons’ scoring has been on a decline as of late, but his presence on the defensive end has been overwhelming most teams.

“I take pride in playing defense. If we get stops and give guys a harder time doing their job, then you know we're gonna be able to go further.” Simmons said in an interview with ESPN’s Rachel Nichols.

The Nets, however, are unfazed by the challenge the 76ers will put up. In fact, Kevin Durant does not even seem concerned about the tough matchup.

“I want to play just to get into the swing of things more so than to pinpoint that matchup,” Durant said in one interview.

KD has sat out the majority of the season due to an injury, but he’s back for the Nets and  seems like he never missed a day. His averages this season are 28.1 points, 7.3 rebounds, and 5.2 assists. Not to mention, he is backed up by Kyrie Irving, James Harden, LaMarcus Aldridge and Blake Griffin.

However, head coach Steve Nash hinted that he will be leading an incomplete team yet again. The Nets are coming off a win over the Minnesota Timberwolves Wednesday, so he might have to sit some of his superstars to give them a break.

Either way, the matchup between the two teams will be exciting to say the least because whoever wins will claim the No. 1 seed in the East.
Read Next
News