On the Lookout: Will Oubre, Warriors strike twice against Mavericks?

<span style="font-size: 15.2px;">Kelly Oubre Jr. and the Warriors scorched the Mavericks in their last game. Can they repeat?</span> 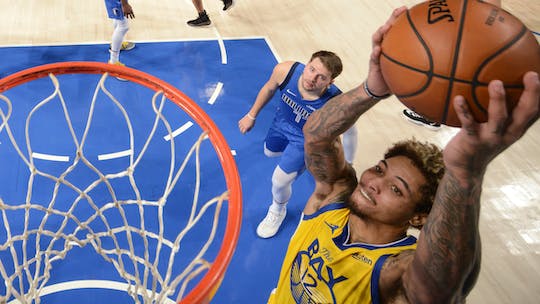 Will Wave Papi strike twice? Probably not, but the Golden State Warriors (12-10) taking on the Dallas Mavericks (9-14) for the second time in three days should still be a fun watch.

Last Thursday, the Warriors won behind a revitalized Kelly Oubre Jr. The man with a million Instagram followers broke out from a slump with a career-high 40 points on 14-for-21 shooting including seven triples. With Draymond Green also playing his best game of the season, Golden State ran away with a 31-point win.

Oubre and Green – two offensively-challenged players – having their breakout games of the season against Dallas speaks to the Mavericks' porous defense this year, ranked 25th in defensive rating and 21st in points allowed per game at 112.5. Barring another scorcher from Oubre, the Mavs should have an easier time stopping the short-handed Warriors, who are missing all their centers (James Wiseman, Eric Paschall, and Kevon Looney) to various injuries.

Golden State has been surviving so far, thanks to role players like Juan Toscano-Anderson, Damion Lee, and Kent Bazemore playing well above their roles. Assimilating several new pieces into their system has been tricky, especially on offense. But the Warriors are getting their rhythm on defense as they are already ranked ninth on defensive efficiency.

Again, expecting a normal swell instead of a tsunami from the Papi of Waves, the stars of this matchup should be each team's MVP candidates. Steph Curry has been Golden State's lone consistent performer, exploding for 28.2 points and 4.5 3-pointers per game on 47.1% shooting. Following a rough shooting start to the season, Luka Doncic has been an all-around threat, averaging a near triple-double with 27.2 points, 8.8 rebounds, and 9.4 assists per contest.

Curry's consistency has allowed the Warriors to remain in the playoff hunt in a stacked Western Conference, despite not having Klay Thompson. Doncic’s numbers, however, haven't been enough to save the Mavericks from spiraling into losing streaks this season.

Dallas' other star Kristaps Porzingis or their role players need to respond to Golden State's challenge. Losing streaks have proven much more costly and harder to end in this condensed season.

Also, check out the Atlanta Hawks (10-12) taking on the Toronto Raptors (10-12) at 9:00 AM. This game should be a fun, fast-paced matchup between teams still trying to find their footing.

The Raptors, displaced from their home court due to the pandemic, have been putting together encouraging performances after looking washed to start the season. Fred VanVleet has been awesome all year. Kyle Lowry is low-key beating Father Time in his 16th season. Pascal Siakam seems to have regained the spice.

Tomorrow's matchup, however, may only be competitive if Trae Young plays. Young, as of writing, is listed as questionable after missing Atlanta’s last game, a lopsided loss to the Utah Jazz, due to right calf contusion. Building chemistry has been an issue all year for the Hawks, who also have Bogdan Bogdanovic and De'Andre Hunter sidelined with injuries.

If Young does play, the Hawks have a great chance to regroup and squash a three-game skid.