Paolo Banchero out for rest of NBA 2K23 Summer League

Magic coach Jamahl Mosley says the No. 1 pick will rest for the remainder of Summer League action to give other players the opportunity to play. 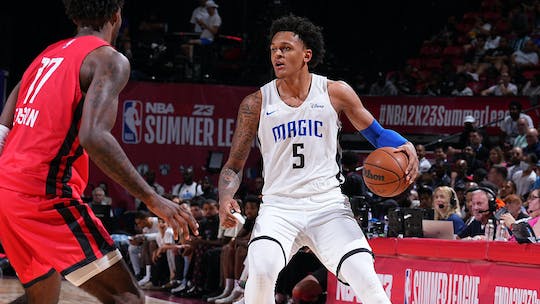 The No. 1 pick averaged 20 points, 5 rebounds and 6 assists in his 2 matchups of Summer League action in Vegas.

And the Magic decided that was enough.

The No. 1 pick is getting the rest of summer league off, after averaging 20 points, five rebounds and six assists in his two games in Las Vegas. The Magic made the decision so they could evaluate other players who are with them this summer and see who may merit a roster spot or G League opportunity.

The Magic are also expected to give Admiral Schofield and R.J. Hampton the remainder of summer league off, which opens up even more minutes for players to get opportunities in Las Vegas.

Mosley said Banchero got all he needed out of the summer experience.

“His understanding of what he needs to do in certain situations, the concepts that we’re preaching offensively and defensively, he’s grasping on to those,” Mosley said. “Watching film together, he’s observing those things. He explains to me the things that he sees on the floor. It’s only two games, but you’re watching those film sessions and you realize how he’s registering all of it. So that’s how you can make the judgment that it’s time let these other guys get those moments.”

The NBA’s Board of Governors will meet on Tuesday, with the expectation that they will finalize a change to the way transition take fouls are officiated. NBA Commissioner Adam Silver said last month a change to the rule was coming, and for summer league games the penalty for such a foul has been one free throw — which may be attempted by any player on the offended team who’s in the game at the time — and continued possession of the ball.

Also on Tuesday’s agenda: keeping the Play-In tournament, which has generally been considered a success.