Pau Gasol announces he is signing with FC Barcelona 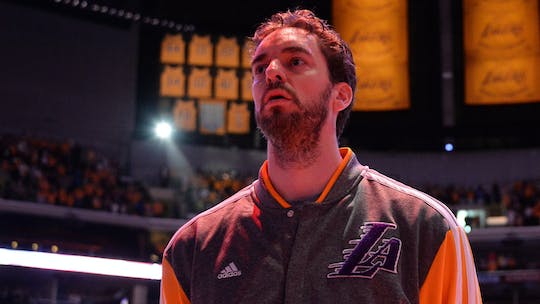 Pau Gasol enjoyed some of his greatest success in the NBA with the Lakers.
Basketball life has come full circle for former NBA All-Star and Rookie of the Year Pau Gasol, who announced Tuesday he is signing with his former team in Spain.

Gasol tweeted that he will be “coming home” to FC Barcelona and is looking forward to playing with the club he started his basketball career with.

“I’m very happy to announce that I’m coming home and that I’ll soon join the ranks of Barca’s basketball team,” Gasol wrote in his tweet. “I’m happy to return to the club where I began, and I’m excited about this new opportunity; I hope to contribute to the team very soon.”


Over the weekend, Gasol had denied reports from Spanish media that he was heading back to play for Barcelona. Gasol debuted for Barcelona in the 1998-99 season, was part of two Liga ACB — the top Spanish league — championships in three years, then was the No. 3 pick in the 2001 NBA draft. He was the rookie of the year for Memphis in 2002, won three Olympic medals with Spain and was part of the team that won the FIBA world championship, now called the Basketball World Cup, in 2006.

Gasol won two NBA titles while playing for the Los Angeles Lakers, where he stayed from 2008-14. He also played for the Memphis Grizzlies, the Chicago Bulls, the San Antonio Spurs and the Milwaukee Bucks. The 40-year-old who was born in Barcelona last appeared in the NBA on March 10, 2019, for Milwaukee.

Last summer, after his NBA playing days came to an end, he was mulling a return to the Lakers or to Barcelona as a finish to his career. Back then, the three-time Olympic medalist with Spain has been out of action for more than a year because of a foot injury. He said the coronavirus pandemic had slowed his recovery process, but that was not necessarily a bad thing.

Gasol has been trying to regain his fitness to be ready to play in his fifth Olympic Games. He said last year that he needed to be playing this season to give himself a chance of making it to Tokyo.

He was a six-time All-Star, made four All-NBA teams and keyed the Lakers’ run to The Finals from 2008-11. He made three consecutive All-Star appearances with the Lakers from 2009-11, and played in the 2006 All-Star Game as a member of the Grizzlies, where he spent the first 476 games of his career.