Paul George's scoring flex has Clippers back on steady ground

LA is turning the corner after a slow start, thanks to their superstar swingman's scoring and other skills. 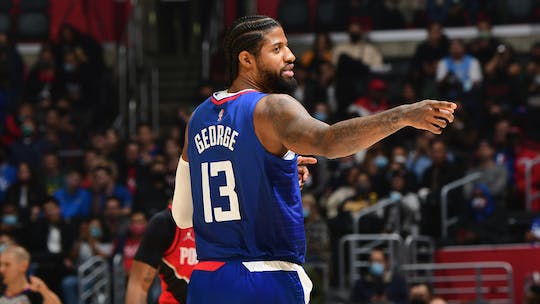 LOS ANGELES — After the ball dropped through the basket, Paul George stared straight ahead. A fan flexed his muscles toward George out of excitement for George’s turnaround jumper on a crucial play. George looked right at him sharing just as much enthusiasm.

Inevitably, the moment became photographed. The photo then went viral. And then a reporter relayed the image to George afterwards, which became valuable both for nostalgia and his memory.

“I do not remember that little kid,” George said, chuckling. “As long as he remembers that moment, that’s all that matters. We shared that together.”

How could George forget such an amusing exchange? Simple. George still remained in his own world while playing a crucial factor in the Clippers securing a 117-109 win over the Portland Trail Blazers on Tuesday at Staples Center.

“It’s no slight on the kid,” George said. “Sometimes I’ll be so lost in the games that I don’t really know what’s going on outside that rectangle. Sorry kid.”

What has sparked George’s stellar play

The kid might have good reason to accept George’s apology. George had just drilled an eight-foot fadeaway over Damian Lillard for a 110-100 lead with 1:22 remaining. George also drew a foul on Norman Powell. And after George’s exchange with the courtside fan, plenty of other Clippers fans yelled out “M-V-P” chants.

Clippers fans did not express hyperbole. George was on the verge of leading the Clippers (6-4) to a fifth consecutive win by posting 24 points on 10-of-24 shooting along with nine rebounds and eight assists. Before Tuesday’s game, George also collected NBA Western Conference of the Week honors after averaging 26.3 points, 8.8 rebounds, 7.3 assists and 1.8 steals.

“It’s player of the week,” George said with both a dismissive tone and body expression. “You don’t put too much into that. The team going 4-0, that’s what I was most proud of.”

After all, George has already collected that honor 10 times during his 12-year career with stops in Indiana (2010-17), Oklahoma City (2017-19) and the Clippers (2019-present). And Clippers coach Ty Lue noted George “got a great stretch last year in the playoffs” when he led LA to the Western Conference finals without Kawhi Leonard by averaging 26.9 points on 44.1% shooting along with 9.6 rebounds and 5.4 assists per game through 21 playoff games.

Paul also remains mindful of the fluid nature of the NBA season amid hiccups two years ago in the bubble, mixed success playing without and without Leonard last season and the team’s 1-4 start this season without Leonard once again.

“I’m pretty sure the second I start shooting poorly and struggling, it’s going to be the same narrative,” George said. “Right now, I’m playing hard and I’m able to get my teammates looks offensively. That’s really the case. I don’t put too much on shooting. Obviously, I want to shoot well. But over a long season, there’s going to be dips here and there. But right now, I’m in a good flow with finding my shots and finding easy ways to get some good looks. T Lue and my teammates help me with that.”

That process started during last season. Not only did George seek to rectify his poor playoff performances in the bubble when he averaged 20.2 ppg on only a 39.8% percent clip along with 6.1 rpg and 3.8 apg. George sought to become a more dependable all-around player to account for Leonard’s overlapping absence and the team lacking a definitive point guard.

That led to George having frequent conversations with former Clippers assistant coach Chauncey Billups while dissecting game footage. Though George found it valuable for Billups to share his insight as a former NBA point guard that led the 2003-04 Detroit Pistons to an NBA title, Billups said he often asked George what he saw on the plays.

During those times, Billups and George discussed how he could dissect defenses by thinking multiple steps ahead of both his defenders’ tendences and any adjustments an opponent might face. With Billups taking the Portland Trail Blazers’ coaching job, George no longer has such in-depth conversations. But George has still found those lessons valuable.

George lamented he could use more guidance after logging a high number of turnovers recently against Minnesota (eight), Minnesota again (six) and Charlotte (eight). Other than those miscues, George has impressed the Clippers and opponents with his consistency elsewhere.

“He’s playing on an MVP level,” said Billups, now the coach of the Blazers. “I think he knows the challenge that he has ahead of him this year with no Kawhi, for now. You want a guy like that to put everybody on your back and say, ‘Let’s go. Let’s give ourselves a chance.’ He has done that every single night. He’s just a match-up nightmare, man. You can’t guard him with one guy. Now his playmaking is a ton better. He puts you in some tough spots.”

How George has emerged as a playmaker and leader

No wonder Lue envisioned George fulfilling the same job description entering the 2021-22 season. Yet, Lue admittedly harbored concerns about extending George’s workload too much. The Clippers could hardly afford George to experience an injury or burnout while Leonard continues his rehab on his surgically repaired ACL in his right knee. So, Lue tried to conserve George’s practice workload and keep his playing time in the 35-minute range.

Recently, though, the Clippers’ medical staff advised Lue that he can play George, Reggie Jackson and Nicolas Batum. That has made Lue feel more comfortable with shortening his rotation so that his active players have a better rhythm. For George, Lue finds it better not to preach to him on when to score or pass.

That’s because Lue does not see George as equivalent to Magic Johnson or Jason Kidd, two Hall of Fame point guards that prided themselves on setting up their star teammates before looking for their shot. Instead, Lue views George as one of the NBA’s best two-way players that can score, pass or defend against the opposing team’s best player on any given possession.

How did that play out against Portland? George took a series of fadeaway jumpers and step-back 3-pointers against various defenders, including Lillard, C.J. McCollum and Robert Covington. He often defended them on the other end, too. And when George encountered double teams, he often just found the open man.

“That’s what you want from your best player,” Batum said. “We miss Kawhi, for sure. But PG right now is our best player. He’s our leader. And he’s one of the best players in the NBA right now.”

Batum did not exaggerate. George ranks fifth in points per game (26.7) behind Chicago’s DeMar DeRoan (26.9), Golden State’s Stephen Curry (27.6), Milwaukee’s Giannis Antetokounmpo (27.6) and Brooklyn’s Kevin Durant (29.5). But the Clippers don’t value George just for how many point he scores. They measure him by how well he leads.

Incidentally, George showcased those qualities when he left the game with 5:53 left in the fourth quarter after collecting his fourth foul. With the Clippers holding only a 70-65 lead, George encouraged his teammates to stay calm amid frustrations with the officiating. George has given pep talks at other times this season to Jackson during a shooting slump and to center Ivica Zubac amid mixed progress with his aggressiveness. In all instances, the Clippers followed through on George’s feedback.

Against Portland, the Clippers maintained an 88-82 lead once George returned with 9:55 left in the fourth quarter. After that, George posted six points and three rebounds, including a fadeaway that led to his viral moment with the young Clippers fan.

“Honestly. I don’t think this is going to be his last Player of the Week [award],” Jackson said. “I don’t think we’ve seen his best games. When a guy like that competes the way that he does, everybody around him has to elevate their game.”

Nets general manager Sean Marks says there will be questions for 'players that we want to bring back in here.'