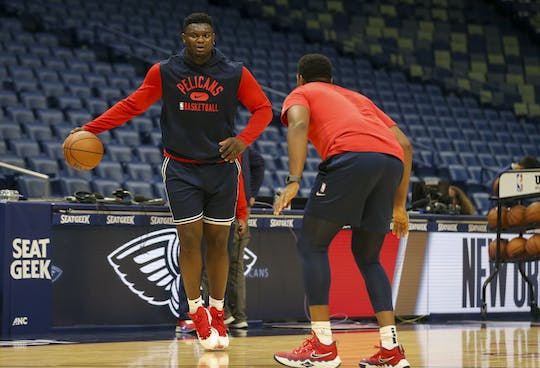 “After experiencing persistent soreness in his right foot, Zion Williamson underwent medical imaging which showed a regression in the bone healing of his fifth metatarsal,” the Pelicans said in a statement released Sunday (PHT) after the team practiced.“ As a result, the volume and intensity of his training will be reduced for an extended period to help allow for further bone healing.”

This marks the second setback since Williamson was cleared in late November to participate in five-on-five practices at full speed. When he was scheduled to take part in his first full practice of the season on Dec. 2, the team announced that it wanted him to rest instead because of renewed foot soreness.

At that time, first-year head coach Willie Green outlined why the club was being cautious and patient with Williamson’s recovery, even as the Pelicans struggled to win without him in the lineup.

“It’s more important to be patient,” Green said. “We’re talking about somebody’s career. Any time you’re dealing with that aspect of professional sports, that is important. That’s how we’re looking at this.”

The Pelicans have started this season 8-20 without Williamson. But since beginning 2-14, New Orleans has gone 6-6 in its past 12 contests. The Pelicans next play Monday (PHT) in San Antonio.

Williamson played in just 24 games as a rookie because of a preseason right knee injury (lateral meniscus). In his second season, he played in 61 of 72 games, averaging 27 points per game.

He hurt his foot last summer while performing basketball drills with his stepfather, with whom he has entrusted his offseason training. The Pelicans revealed the injury on the first day of training camp in September, saying they hoped he’d be ready to play by the regular-season opener on Oct. 20. Williamson agreed with that timeline, which has since proved overly optimistic by at least two months.

Now there’s no definitive timeline for Williamson’s return, with the Pelicans saying only that “additional updates will be provided as warranted.”