Gabe Norwood
Twitter Instagram
Gabe Norwood is a PBA veteran and former team captain of Gilas Pilipinas. He picked up basketball at the age of five and got the nickname “Little Magic” (Johnson) early on. He once played in the U.S. NCAA Final Four for George Mason University. 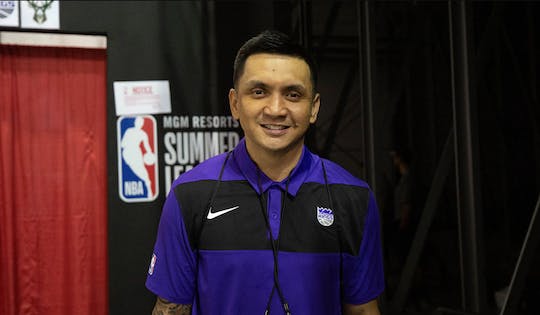 Gabe Norwood: How did this opportunity come about for you?

Jimmy Alapag: It goes back two summers ago. I was just done coaching Alab Pilipinas in the ABL and I wanted to continue learning as a coach. It led to me reaching out to Vlade Divac at the time. We got to know each other through the FIBA Players Commission that I’ve been a part of for several years. That led to an invite from Sacramento at the Summer League. That summer I spent about six or seven weeks with the team and they gave me a chance to just be in that space, being around the guys, getting to know Coach Bobby Jackson. It’s crazy to be able to work with someone who you grew up watching.

Fast forward to a year and a half later, he gets the coaching job with Stockton. He reached out and asked if I wanted to join his staff and, of course, I couldn’t have replied fast enough saying yes. That got the ball rolling and then joining them again for the Summer League this past summer.

Gabe: With the pandemic hitting—and last year, Stockton didn’t have a team in the bubble—how did you keep yourself locked in in terms of basketball? How did you prepare yourself even though there’s so much uncertainty around the game?

Jimmy: The family and I moved here in September 2020. I was in contact with Coach Bobby and we spoke then about Stockton possibly joining the G League bubble, but again it was right smack in the middle of the pandemic. It ended up working out to where almost half of the league wasn’t playing in the bubble. Unfortunately, Stockton decided not to play.

At that time, when Coach Bobby and I spoke, there was a possibility of an opportunity that I was hopeful for. But when they decided not to join the bubble, it was tough. It was the first time in years that I wasn’t connected to the game in some way, shape, or form.

That was a huge challenge for me to almost be disconnected from the game in a way. But I just tried to stay connected. I’ve done more Zoom meetings with coaches from all over the world, Australia, Europe, Japan, just trying to keep my mind connected and finding ways to grow.

Aside from that, just spending time with family. It really gave me a chance to step back and value the time that I have with my wife and my kids and be a part of their lives because they’re still young.

But being away from the basketball stuff was tough, definitely one of the tougher things I’ve gone through but God’s timing to get this opportunity now was a blessing for sure.

Gabe: Now that you’re in this role, in this transition to the coaching side, who are some of your coaching inspirations and guys you look up to?

Jimmy: From my experience in the Philippines, Coach Norman Black has been a huge, huge influence since I’ve made this transition to coaching. After retiring, he gave me a chance to spend a whole year with him. You’re talking about a guy who had so much success in the PBA, not only as a player but also as a coach, to be alongside him in the coaches’ meetings, seeing how he prepares for practices and games, and just having conversations with him.

I think the coolest part about working with Coach Norman is he gave me a voice within his staff right away. He respected my basketball IQ and how I saw the game. We had a lot of good conversations.

Coach Jamike Jarin, who’s an assistant coach with Phoenix [Fuel Masters], has been very supportive. He always reminds me to not be afraid of thinking outside of the box.

And our experience with Coach Chot Reyes. I felt like one of Coach Chot’s biggest strengths is that he allowed us to be who we are as players, but encouraged and motivated us along the way, which I thought was a huge reason for our success in Gilas.

Gabe: In terms of the current staff that you’re going to be on with Bobby Jackson, is there a role set for you?

The great part about working with Coach Bobby is that the way he wants to coach is the way he played and in a lot of ways the way I played the game. Especially how the game of basketball has evolved in terms of the pace and the ball movement, guys playing unselfishly, but at the same time communicating and locking in on the defensive side. So all those components to a team are what I encourage my teams that I’ve coached in the past, so for us to be on the same page, and it comes naturally. He’s a natural leader, he’s a winner, so I’m really fortunate to get this chance to work alongside him. I’m looking forward to the season and I’m super excited.

Jimmy: To get a chance to see him up close, you heard about the stories, the reigning defensive player of the year, he swept all three awards, a national champion, I was just excited to see him. I was blown away.

You’re at the top of the list in terms of defensive players that I had a chance to play with, you defensively, it was your footwork, it was your length and athleticism, but Davion is only 6”1’. His hands and his feet and how he’s able to mirror the ball defensively against the guy that’s guarding and really just close air space and make guys uncomfortable. To see it up close, for someone who’s been around the game for a long time, just really, really impressed.

But it’s not just the defense. The leadership, the work ethic. He’s a winner. I think that mentality, that personality really carried over to the rest of the guys in the Summer League because he was locked in on the defensive end, on the offensive end he was making shots, he was creating opportunities for other guys.

Watching him in the huddle, talking guys up, encouraging guys, it was very natural for him to be in a position of leadership.

Gabe: What are your thoughts on Jalen Green?

Jimmy: I didn’t get a chance to connect with him in Vegas but I did see a part of one of his games and it was the game when he played against Cade Cunningham. With Jalen, I think talent-wise and athletically, he’s up there. The sky’s the limit with his potential in terms of his skill set, athleticism, the ability to find the basket and it showed.

I think Jalen’s experience in the G League was a big help because for the past year he’s been training and playing as a pro, really learning the NBA game. For me, it was really a fluid transition. He was playing with pros and during the Summer League, he was just comfortable. When guys pressured him, he knew how to react to it. He was using the speed, quickness, and athleticism to finish at the rim, and then he’s out there making shots. His game, the way the NBA is being played now, with the speed and the athleticism, he fits right in.