The two coaches have guided their teams to the top of the standings. 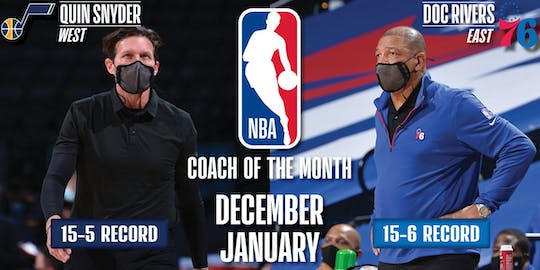 Utah Jazz coach Quin Snyder and Philadelphia 76ers coach Doc Rivers have been named the NBA Coaches of the Month for games played in December and January.

The first six weeks of the season were highlighted by an 11-game win streak for the Jazz, which powered them to 2nd in the Western Conference standings with a record of 15-5.

The 76ers have been dominant at home all season and sit in 1st place in the East with a record of 15-6.

NBA Coaches of the Month for Dec. & Jan.