Raptors GM Masai Ujiri didn't find a trade package that moved him to deal the guard. 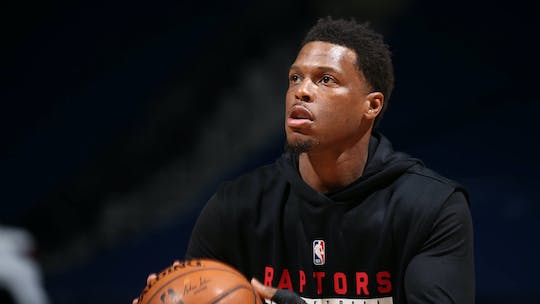 Toronto Raptors guard Kyle Lowry was perhaps the top potential prize on the trade market going into the deadline. And while there were plenty of teams in pursuit of him throughout the day, he’ll ultimately finish the 2020-21 season right where he started: with the Raptors.

ESPN’s Adrian Wojnarowski reports that Raptors GM Masai Ujiri ultimately couldn’t find a trade package that compelled him to move Lowry. Additionally, Ujiri had — per Wojnarowski — been fine with finishing out the season with Lowry in the fold.

The Philadelphia 76ers were in the mix for Lowry, but fell out of that when they swung a reported trade that landed them veteran point guard George Hill. The Miami Heat, per reports, seemed to be leading the pack of teams pursuing him — with the Los Angeles Lakers also in that mix. But neither the Heat nor Lakers would part with the players the Raptors most seemed to want: Tyler Herro from Miami and Talen Horton-Tucker from the Lakers.

Keith Pompey of The Philadelphia Inquirer reports the Raptors reportedly wanted the 76ers to include prized second-year guard Matisse Thybulle and rookie Tyrese Maxey for Lowry, moves Philadelphia was apparently unwilling to make.

In nine seasons with the Raptors, Lowry has helped Toronto become one of the league’s most consistent franchises. He led them to an NBA title in 2019 and the Raptors have made the playoffs seven straight seasons, too.

Lowry has played 592 games with the Raptors and is one of the most decorated players in team history. He is the team’s all-time leader in regular-season assists, steals, 3-pointers made and 3-pointers attempted. He also ranks second in regular-season games played and points to DeMar DeRozan. Playoffs-wise, Lowry is Toronto’s all-time leader in practically every major statistical category except for blocks, free throws made, offensive rebounds and 3-point percentage.

Thursday happens to be Lowry’s 35th birthday, though he’s telling people he’s turning 30 again. Other than getting presents from his kids, he said Wednesday night he didn’t know what will happen — or even what he wants to see happen on the trade front.

“I wish I could give you a decision,” Lowry said Wednesday night. “At the end of the day, if something happens, it happens. And if it doesn’t, it doesn’t, right? Everything happens for a reason. I personally, right now, I don’t know.”

Deals had to be agreed to and reported to the league by the 3 p.m. ET deadline. It may be several more hours after that deadline before things are finalized; the NBA holds what are known as “trade calls” with the teams involved to ensure that all the financial matters fit within league rules, and there’s often a backlog of those on trade-deadline day.

The Heat remained in the mix for Lowry, reports Anthony Chiang of the Miami Herald as Lowry had interest in the Heat because of his friendship with Jimmy Butler.

Miami’s challenge in landing Lowry resided in his contract: $30.5 million for this season as a part of his expiring deal. To get him, the Heat would have to send out roughly $24 million in salary to make the financials of the trade work. Doing so would likely lead to Miami parting with several rotation players and, thus, altering the overall look of its roster.

The Heat’s three-highest salaries — not including All-Stars Bam Adebayo and Butler — are Goran Dragic, Andre Iguodala and Kelly Olynyk. Chiang writes the Heat would have to part with at least one of those players to make the deal work. And, that doesn’t likely include Toronto’s likely ask for a young player such as Tyler Herro, Duncan Robinson or rookie Precious Achiuwa in the deal.

Ultimately, the Heat opted to trade for another former All-Star: Houston swingman Victor Oladipo. In that reported trade, Miami dealt Olynyk, Avery Bradley and a 2022 second-round pick to the Rockets for the former Kia Most Improved Player winner Oladipo.

Had Miami gotten Lowry, it would have held his Bird Rights and could re-sign him this offseason. But as has been previously reported, acquiring Lowry at the cost of some of Miami’s key veteran players gave the Heat second thoughts on making that deal.