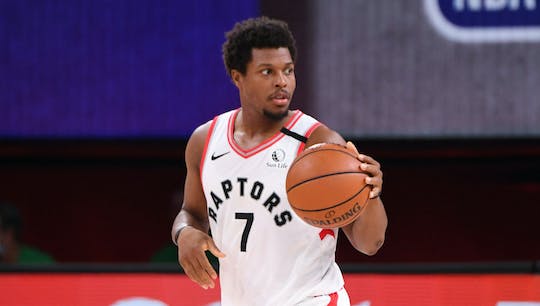 Kyle Lowry’s career didn’t start in Toronto, and it’s about to continue in Miami, but the Raptors are set to honor their long-time leader with a permanent position up in the rafters. Jared Weiss of The Athletic reports that Raptors chairman Larry Tanenbaum and the organization plan to retire Lowry’s No. 7 jersey, which would mark the first such player honor for the franchise.

Lowry would become the first player to have his jersey retired by the Raptors. pic.twitter.com/FP61psfpmh

“He will retire as a Raptor and his number will absolutely go up there,” Tanenbaum told Weiss. “The honor will be the first one (for the Raptors) and I love Kyle.

Earlier Friday, Lowry showed his love for the city with a full-page ad in The Toronto Star.

In the ad, Lowry wrote: “Thank you for being HOME, Toronto. Forever grateful, LOVE K-Low.”

After being drafted by the Grizzlies out of Villanova in 2006, Lowry split his first six seasons between Memphis and Houston before being traded to the Raptors in July 2012. Lowry’s second season in Toronto proved a career breakthrough, producing 17.9 ppg, 4.7 rpg, 7.4 apg and 1.5 spg. He made his first All-Star team the next season, tipping off a streak of six straight appearances (2015-20), ultimately spending nine seasons in Toronto, and winning a memorable NBA title in 2019.