The Raptors rookie is expected to miss Game 2 after being diagnosed with a left ankle sprain. 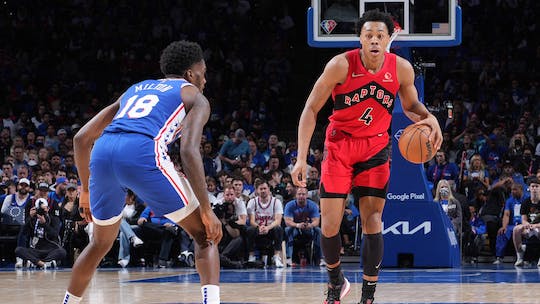 Raptors guard-forward Scottie Barnes underwent an MRI and has been diagnosed with a left ankle sprain, the team confirmed today. The star rookie suffered the ankle injury in the fourth quarter of Toronto’s 131-111 loss to the 76ers.

Additionally, the Raptors announced that forward Thaddeus Young has been diagnosed with a hyperextension injury to his left thumb. Both players along with guard-forward Gary Trent Jr. are listed as doubtful for Tuesday’s (PHT) Game 2 matchup against the Sixers.

While contesting a shot from Joel Embiid, Barnes’ ankle appeared to buckle as Embiid came down on top of his foot. Barnes appeared to be in pain and had to be helped off the court with 9:06 left in the game. The Raptors later said he suffered a left ankle sprain and would not return. After the game, the team said that his initial X-rays were negative.

Barnes was a revelation for Toronto this season, putting himself in the Kia Rookie of the Year conversation with a stellar 1st season. Barnes averaged 15.3 points, 7.5 rebounds and 3.5 assists while starting playing 74 games (all starts) for the No. 5 seeded Raptors.