Report: Anthony Davis unlikely to play in Game 5 vs. Suns

The Lakers' star suffered a left groin strain late in the second quarter of Game 4 against the Suns. 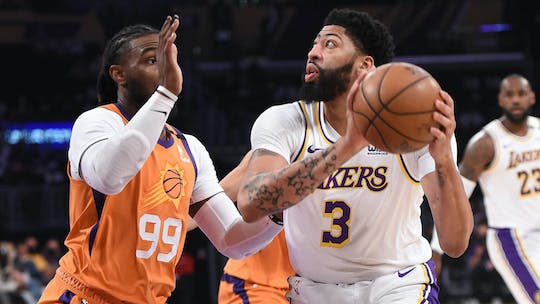 Los Angeles Lakers star big man Anthony Davis will reportedly miss Game 5 of the team’s first-round series with the Phoenix Suns. The Athletic’s Shams Charania reports that Davis, who is suffering from a left groin strain, will be unlikely to play in Wednesday's Game 5.

Davis was questionable entering Game 4 on Monday because of a knee injury suffered in Game 3. But Davis started and played 19 minutes, 24 seconds in the first half. He was clearly hurt after colliding with Jae Crowder on a drive to the basket.

Davis did not reappear with the team after halftime, and Kyle Kuzma started in his place. The team revealed the new groin injury shortly after. The Suns, who opened a double-digit lead in the third, would tie the series with a 100-92 victory to tie the series 2-2.

“I thought he was laboring a little bit” even before the groin injury, Lakers coach Frank Vogel said of Davis, who missed 30 games in the regular season. “He was saying that his knee was sore, but there was no way that he was not going to play. I thought he gave a heck of a run at it, trying to compete through pain.”

Multiple reports surfaced after the game that Davis’ status for Game 5 was uncertain. Shams Charania of The Athletic tweeted that the star big man had avoided a serious injury, but that his ability to play on Tuesday “is very much in question.”

ESPN’s Dave McMenamin and Adrian Wojnarowski report that Davis is day-to-day in terms of his ability to return in the series.

LeBron James had 25 points and 12 rebounds for the Lakers, who fell too far behind in the third quarter while Davis was being evaluated in the locker room. Before its last-minute surge, Los Angeles struggled in the absence of starters Davis and Kentavious Caldwell-Pope, who injured his knee in Game 3.

Davis left Staples Center before the game ended for medical treatment. James will be carrying even more responsibility if Davis misses any games, but he’s ready.

“For me, it’s putting our team in position to be successful,” James said. “These shoulders were built for a reason, and if it takes a little more to put on top of it, I’m ready for the challenge.”

Phoenix made a 32-15 run starting shortly before halftime and encompassing the whole third, during which it held the Lakers to 15 points on 3-for-16 shooting with Davis absent.

The Lakers hit just four more 3-pointers in the second half, however. Matthews and McLemore didn’t score again after their early burst.