Cleveland reportedly will trade Ricky Rubio to Indiana in a deal to acquire LeVert. 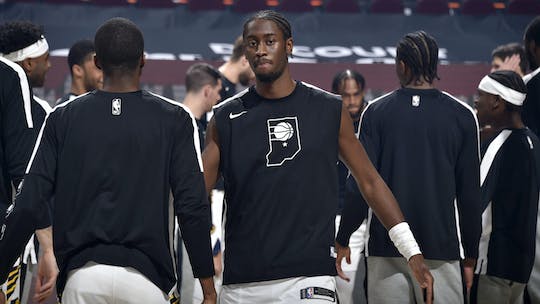 Caris LeVert is reportedly headed to Cleveland in a trade.

The Cavaliers have gone from surprising contenders to serious ones.

Pulling off a major move ahead of this week’s NBA trade deadline, Cleveland added another young star to its roster by agreeing in principle to acquire guard Caris LeVert in a deal from Indiana.

The Cavs are sending Ricky Rubio, and his expiring $17.8 million contract, a lottery protected first-round draft pick in 2022 and two second-round picks to the Pacers for LeVert, a person familiar with the trade told The Associated Press.

Cleveland will also get a second-round pick in 2022, said the person who spoke on condition of anonymity because the teams have not yet participated in the required conference call with the league for approval.

ESPN’s Adrian Wojnarowski was the first to report the trade on Monday (PHT).

“Cleveland just picked up a heck of a player,” Carlisle said.

The Cavs, who won just 22 games last season, have moved into playoff position and believe they can win the Eastern Conference title. They’ve been aggressively shopping for more backcourt help after losing guards Collin Sexton and Ricky Rubio to season-ending injuries.

LeVert should more than help. The 27-year-old is averaging 18.7 points and 4.4 assists for the disappointing Pacers, who are 19-35 and already thinking about their future.

“Cleveland is in a great position, and adding a guy like Caris LeVert very well could push them to the top,” Carlisle said during his pregame news conference, which was slightly delayed as news of the trade broke.

The league’s trading deadline is Friday (PHT), and it’s not out of the question that the Cavs and Pacers may each make another move. In the short term, the LeVert deal is a potential season-changer for Cleveland.

The Cavs entered Monday just 1 1/2 games behind the Bulls for the top spot in the East. It’s been a stunning ascent for a young Cleveland team that wasn’t expected to do much this season but has overcome injuries and developed quickly.

LeVert will likely slide into the starting backcourt alongside All-Star Darius Garland, who has been slowed by a sore lower back lately. After losing Rubio to a season-ending knee injury, the Cavs acquired veteran Rajon Rondo but have always had their eyes on LeVert, a proven scorer and playmaker.

While he’s been the subject of trade rumors for weeks, LeVert arrived for Monday’s game unaware the he would soon be changing jerseys, taking a huge jump in the standings and likely headed to the playoffs.

“We have a unique understanding here with our front office and players, where if a deal gets close, we will talk to the player so he doesn’t see it on social media or somewhere else,” Carlisle said. “We did that with Caris in my office, and (general manager) Chad (Buchanan) on a speaker with us.”

In Cleveland, LeVert will be reunited with former Brooklyn teammate Jarrett Allen, who has developed into one of the league’s best young centers since being acquired in the deal that sent James Harden from Houston to the Nets. LeVert was also part of that trade.