Report: Chris Paul to have MRI on right hand

Chris Paul will reportedly have an MRI on his hand after injuring it in Phoenix's 124-121 win that pushed the Suns' win streak to 7 games. 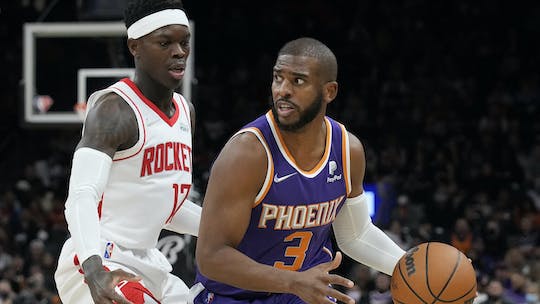 Phoenix Suns guard Chris Paul will have an MRI on his right hand Thursday after suffering an injury in Wednesday’s game vs. Houston, per Yahoo Sports’ Chris Haynes.

Phoenix improved to 48-10 heading into the All-Star break as Paul was hurt and then ejected in a 124-121 win vs. the Rockets. In the win, Paul finished with 11 points and six assists in 19 minutes and, after the game, the main concern was the status of his hand. The 12-time All-Star was angry after getting his right hand jammed on a pass and argued for the first technical.

He then bumped into referee J.T. Orr a few seconds later, which earned the second technical. Paul left the court holding his right hand but it was unclear if the injury was serious. There was no official update after the game on the status of his injury.

Paul’s injury was a disconcerting development in the last game before the break. It’s one of the few things that’s gone wrong for the Suns so far this season, who have rolled through much of their schedule.

Suns star Devin Booker said Paul was “fine” during the postgame news conference and didn’t expect the injury to hold his backcourt teammate out of the All-Star Game in Cleveland on Sunday.

Paul had surgery after the 2021 Finals on his left wrist to repair partially torn ligaments. This season, he is averaging 14.9 points and an NBA-leading 10.7 assists per game while shooting 48.7% overall and 33% on 3-pointers.

In the All-Star Game, Paul is a member of Team LeBron. Should he have to miss that game due to injury, NBA Commissioner Adam Silver would select who replaces him on the team.