The new deal for the Hornets' young guard will keep he and the team together through 2025-26. 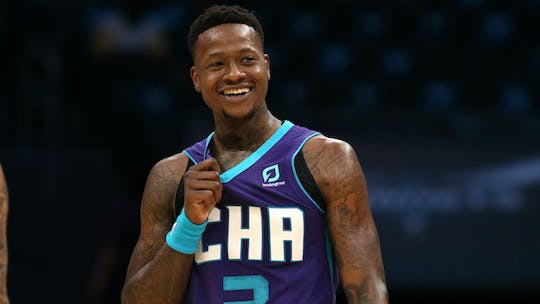 Charlotte Hornets guard Terry Rozier is apparently the latest player to agree to stay with his team long term.

Per Shams Charania of The Athletic, Rozier and the Hornets have agreed to a four-year, $97 million extension that will keep him in Charlotte through the 2025-26 season. The Hornets originally added Rozier in the summer of 2019, landing him via a sign-and-trade deal with the Boston Celtics that moved franchise icon Kemba Walker to Boston.

Rozier has spent the last two seasons in Charlotte and has taken flight there. He enjoyed a career-best season as a scorer in 2020-21 (20.4 points per game) while also posting 4.4 rebounds, 4.2 assists and 1.3 steals per game in 69 games (all starts). His first season in Charlotte, he averaged 18.0 ppg, 4.4 rpg and 4.1 apg as he became a full-time starter for the first time in his career.

Amongst the most noteworthy outings by Rozier this season included a then-career high 42 points in Cleveland on Dec. 23, a performance that featured an opening night-record 10 three-pointers. He also had a 41-point showing against Minnesota on Feb. 12, hit his first game-winning buzzer-beater two nights later versus Golden State, reset his career high by dropping 43 points on New Orleans on May 9 and finished the season with a personal-best five double-doubles.

Rozier showed some fortitude in the clutch for the Hornets as well last season, hitting 14 3-pointers during these particular situations, trailing only Damian Lillard, Stephen Curry and Karl-Anthony Towns.

Earlier this offseason, Charlotte announced it had signed coach James Borrego to a multiyear contract extension. Borrego is 95-124 in three seasons with the Hornets, but has given team owner Michael Jordan enough confidence that things are moving in the right direction. The Hornets were 33-39 last year and lost to the Indiana Pacers in the play-in game.

Charlotte has not made the playoffs since the 2015-16 season and hasn’t won a playoff series in the last 19 seasons.