Report: Jeff Teague will sign with Bucks after clearing waivers

The veteran guard will reportedly sign with Milwaukee after being waived by Orlando. 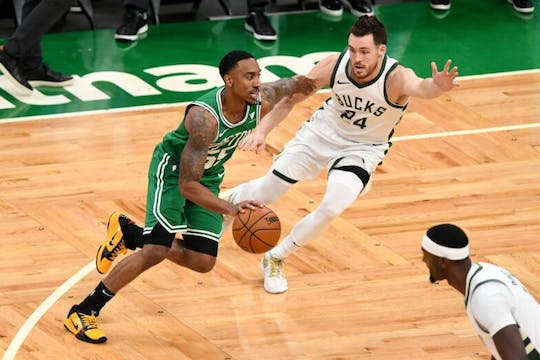 Free agent guard Jeff Teague is expected to sign with the Milwaukee Bucks, according to a report from Adrian Wojnarowski of ESPN.

Teague played 34 games with the Boston Celtics this season before he was traded to the Orlando Magic last week and then waived. He averaged 6.9 points, 1.7 rebounds and 2.1 assists with the Celtics and started five games.

The 32-year-old guard has experience with Bucks coach Mike Budenholzer, who coached Teague for 3 seasons from 2013-16, including Teague’s lone All-Star season in 2014-15.

Teague, playing in his 12th NBA season, should help the Bucks fill a bench-guard void created when D.J. Augustin was traded to the Houston Rockets to acquire P.J. Tucker earlier this month.

The Bucks are the third seed in the East standings with a record of 29-16.
Read Next
News