Butler averaged 21.5 points per game last season in Miami, which is hoping to bounce back from a 1st-round sweep by Milwaukee. 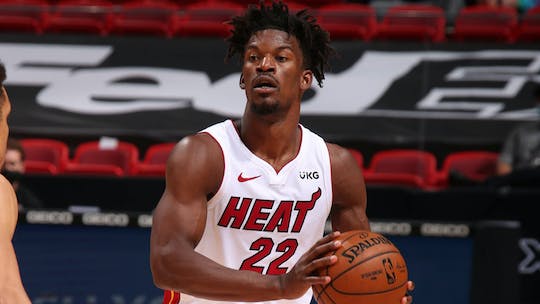 The Heat have reportedly agreed to a contract extension with star swingman Jimmy Butler that will keep him in Miami for four more seasons.

Shams Charania of The Athletic reports Butler is expected to sign a four-year deal that will exceed $184 million.

Miami scored another big win in the opening hours of free agency as well as it reportedly agreed to a sign-and-trade deal that will land it former All-Star guard Kyle Lowry.

Butler joined the Heat in 2019 in free agency via a four-team trade and promptly helped Miami to its first NBA Finals since 2013 when LeBron James was the Heat’s star. Last season, the Heat took a step back, finishing 40-32 and losing in the first round of the playoffs to the eventual-champion Milwaukee Bucks.

The Heat lost 10 games to teams that didn’t end up making the playoffs, lost nine games they led by double figures and were wildly inconsistent. They won 11 out of 12 games in one stretch, then immediately dropped six in a row. And COVID-19 was another issue; Butler tested positive and missed 10 games, a stretch where the Heat went 2-8.