The Warriors forward will reportedly be evaluated to determine if he can continue playing with the injuries. 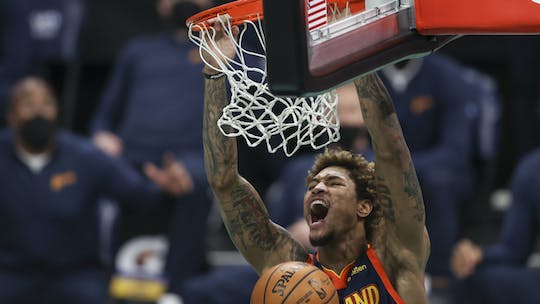 Kelly Oubre Jr. is averaging 15.4 points per game this season, his first with the Warriors.

Golden State Warriors forward Kelly Oubre Jr. has been playing with a torn ligament in his left wrist as well as a fracture of the hand, and will be examined further to determine if he can continue, Shams Charania of The Athletic reported Sunday (PHT).

Oubre reportedly aggravated his wrist on April 9, missing five games. He then returned for five games, averaging 17 points, before returning to the sideline for day’s loss to the Timberwolves.

Oubre will have further evaluations on his wrist to determine whether he can continue playing through the injury, sources said. Oubre is averaging 15.4 points and six rebounds per game this season. https://t.co/bciBSD3vgN

Oubre, 25, is averaging 15.4 points this season, his first with the Warriors, and 11.5 points for his career. The Warriors entered Saturday’s action in a tight battle for the Play-In Tournament at 10th in the Western Conference.