Boston's busy offseason reportedly continues with another extension for a player the franchise drafted and developed. 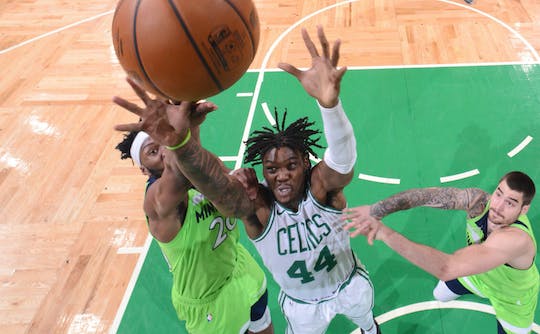 The Celtics are making an annual habit of extending their homegrown talent.

Two years after extending Jaylen Brown and one season after doing the same for Jayson Tatum, Boston has reportedly come to a long-term agreement with center Robert Williams. ESPN’s Adrian Wojnarowski reports the deal is for four years and $54 million.

The  27th overall pick of the 2018 Draft was entering the final season of his rookie deal and could have become a restricted free agent next summer. The news comes days after the franchise also reportedly came to terms with Marcus Smart for a four-year, $77 million extension.

ESPN story on Robert Williams agreeing to a four-year, $54 million extension with the Boston Celtics: https://t.co/V0kmd89ngY

Instead, the 23-year-old shot blocker remains with the Celtics’ talented young core for the foreseeable future. Williams averaged career highs in minutes (18.9), points (8.0), rebounds (6.9), and blocks (1.8) in 2020-21. An ankle injury in Game 3 cut short his availability in Boston’s first-round loss to Brooklyn.