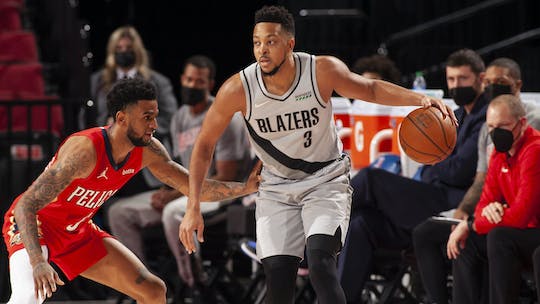 The Portland Trail Blazers have agreed to trade CJ McCollum to the New Orleans Pelicans, per ESPN’s Adrian Wojnarowski and The Athletic’s Shams Charania.

Portland’s decision to trade McCollum comes just four days after it parted with Robert Covington and Norman Powell in a swap with the LA Clippers. In that trade, the Blazers got Eric Bledsoe, Justise Winslow, Keon Johnson and a future second-round pick as well as some salary-cap flexibility in the future.

This season, McCollum is averaging 20.5 points, 4.3 rebounds and 4.5 assists per game while shooting 43.6% overall and 38.4% on 3-pointers. He has averaged 20 or more points per game for seven straight seasons and missed 17 games earlier this season with a collapsed lung.

Nance Jr. was acquired by Portland as a part of a three-team offseason trade involving the Chicago Bulls, Cleveland Cavaliers and Blazers. He is averaging 6.9 ppg, 5.6 rpg and 2.0 apg as a reserve for the Blazers and is known for his ability to play the passing lanes and get steals. Snell is best known for his 3-point marksmanship but has struggled in that area this season. He’s shooting 32% on 3-pointers after a career-best 56.9% last season with the Atlanta Hawks.

Hart has emerged as a reliable starting guard for New Orleans this season, appearing in 41 games (40 starts) while posting 13.4 ppg, 7.8 rpg, 4.1 apg and 1.1 spg. He agreed to a three-year extension with New Orleans which is worth $37.9 million and includes a third-year player option. He has been a popular and productive role player in New Orleans since being traded to New Orleans during the 2019 offseason — along with forward Brandon Ingram, guard Lonzo Ball and two first-round draft picks — from the Los Angeles Lakers as part of a deal that paired Anthony Davis with LeBron James on the Lakers.

The trade marks the end of an era on Portland, where McCollum has been paired with Damian Lillard in the backcourt since 2013. Portland has reached the playoffs every season since they drafted McCollum. However, the Blazers struggled in the postseason, reaching the Western Conference finals only once while being eliminated in the first round five times.

In trading McCollum to New Orleans, Portland will move his deal and the remaining roughly $69.1 million still left to be paid on it. Per ESPN’s Adrian Wojnarowski, the Pelicans were interested in a high-level veteran guard after they were rebuffed by Kyle Lowry in free agency last summer.

Wojnarowski reports the Blazers’ plan now is to reshape the roster around star Lillard thanks to creating potentially $60 million in salary cap space for the 2022 offseason. Lillard, a six-time All-Star, had abdominal surgery in January and is out indefinitely. Additionally, Aaron J. Fentress of The Oregonian reports Lillard is on board with Portland’s roster renovation.

New Orleans is No. 10 in the Western Conference standings and 1/2 game ahead of Portland in the Play-In Tournament standings. McCollum’s move to New Orleans gives the Pelicans a needed outside shooting threat at a time when New Orleans appears to be on the upswing under first-year coach Willie Green — despite playing without star forward Zion Williamson all season.

Williamson, incidentally, has been in Oregon trying to rehabilitate from offseason surgery to repair his fractured right foot. It is unclear if he will be ready to return at all this season.

The trade of Covington and Powell was the first major move under interim Blazers general manager Joe Cronin. He took over when Neil Olshey was fired in December after a workplace environment investigation. When Lillard played in his last game — on New Year’s Eve, 2021 — he started alongside Nance Jr., Powell, Snell and Nassir Little. Since then, three of those players have been dealt while Little is out for the season following shoulder surgery on Feb. 1.

With the Blazers seemingly heading towards a rebuild while Lillard mends from his injury, the Pelicans may be primed to not only make the Play-In Tournament, but perhaps rise higher in the West as the 2021-22 season wanes.