The Hawks' power forward will be staying put after agreeing to a five-year contract. 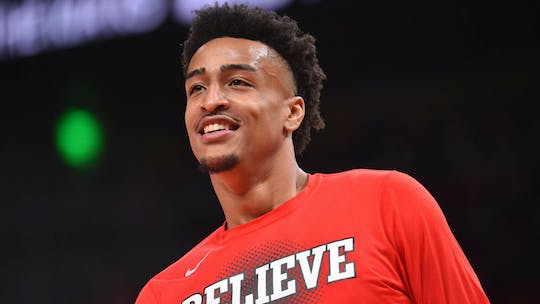 The Atlanta Hawks have secured their young power forward for years to come, it seems. Per Adrian Wojnarowski of ESPN and Sarah K. Spencer of The Atlanta-Journal Constitution, John Collins and the Hawks have agreed to a five-year, $125 million deal that includes a player option.

Last season, Collins averaged 17.6 points and 7.4 rebounds for the Hawks and opted to pass on an extension before the 2020-21 season began. That moved paid off as he played an instrumental role in Atlanta reaching its first Eastern Conference finals since 2015.

A career 56.7% shooter, Collins has shown an improving 3-point shot over the past two seasons and is a career 38% shooter from deep. Last season, he sank a career-best 83 3-pointers and shot 39.9% on those attempts as well.

In the 2021 playoffs, Collins made his biggest impact, though. He averaged 15.3 ppg and 9.0 rpg against the Philadelphia 76ers in Atlanta’s series win, including a 19-point, 11-rebound performance in the Hawks’ thrilling Game 6 comeback win. He was equally solid in the East finals against the Milwaukee Bucks, putting up 13.8 ppg and 9.5 rpg.

Earlier this offseason, the Hawks further secured the core of their team by agreeing to a maximum contract extension with All-Star guard Trae Young. Before that, the Hawks made sure the coach that guided Atlanta on its playoff run did not leave the fold either. Coach Nate McMillan had the interim tag removed from his title after he led Atlanta to a 27-11 mark in the regular season and on its standout playoff run.

The Hawks suffered a key injury during the conference finals when Young, the team’s leading scorer, missed two games with a bone bruise in his right foot after inadvertently stepping on an official’s foot and twisting his ankle in Game 3. That injury essentially ended Atlanta’s hopes of a Finals berth, but a bright future is in place.

In agreeing to deals with Young and Collins, the Hawks have a clear picture of their future for the first time in several seasons. Those deals — coupled with Atlanta boasting a promising young core of Clint Capela, Kevin Huerter, Bogdan Bogdanovic and others in the fold — make the Hawks a serious threat in the East for years to come.