Cleveland, seeking help for its injured backcourt, will reportedly land the veteran in exchange for Denzel Valentine 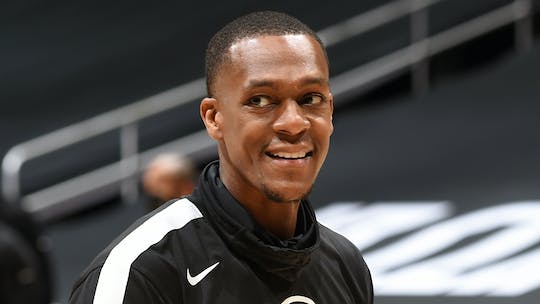 The Cavaliers and Lakers have agreed to a trade that will send veteran guard Rajon Rondo from Los Angeles to Cleveland, per multiple reports. In the trade, the Cavs will send Denzel Valentine to L.A. for Rondo, but the Lakers are expected to waive Valentine’s partially-guaranteed deal to create a roster opening.

As of Thursday night, the Cavs and Lakers were making progress on the deal per multiple reports.

Cleveland has been urgently looking for an experienced guard since Ricky Rubio suffered a season-ending knee injury Tuesday night.

Valentine averaged just 9.3 minutes for the Cavs, who have been one of the league’s most improved teams this season. The 28-year-old signed a two-year deal with Cleveland in September.

Rondo is in his first season with the Lakers, who are just 17-19 and have struggled with one of the NBA’s older rosters. In a reserve role, the 35-year-old is averaging 3.1 points and 3.7 assists in 18 games.

The Cavs have been one of the league’s biggest surprises, and what to keep their momentum going.

They’re desperate to find a proven guard after Rubio, who had a major impact on Cleveland’s early season turnaround, tore his left anterior cruciate ligament against New Orleans. Rubio also tore his left ACL as a rookie in 2012.

Rubio had a positive effect on Cleveland’s young players, especially guard Darius Garland, who is currently in health and safety protocols.

Rondo, who is in his 18th season and has plenty of playoff credentials, could provide the Cavs with some of the same attributes as Rubio.