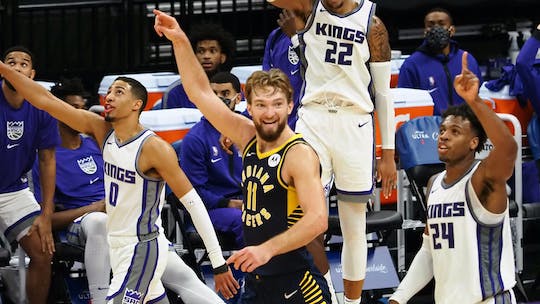 The Sacramento Kings have reportedly acquired Domantas Sabonis in a trade with the Indiana Pacers, per ESPN’s Adrian Wojnarowski and The Sacramento Bee’s Jason Anderson.

The Kings are 20-35 but just two games behind the New Orleans Pelicans for the No. 10 spot and a place in the Play-In Tournament mix. Sacramento has won two of its last three games and is gearing up for a key stretch of its season as it will have eight of its next 11 games on the road — many of which against playoff-caliber opponents.

Sabonis, a former two-time All-Star, is one of seven players in the NBA averaging more than 18 points and 10 rebounds (18.9 ppg, 12.1 rpg) this season. Indiana is just days removed from sending Caris LeVert to the Cleveland Cavaliers for future Draft picks and injured guard Ricky Rubio. Sabonis’ name was mentioned in several trade rumors on Tuesday and his move to the Western Conference struck many as a surprise.

With the Kings, Sabonis will team with star guard De’Aaron Fox and veteran forward Harrison Barnes and big man Richaun Holmes as the team tries to make the postseason for the first time since 2006. The impact of Sabonis’ game will come on the inside, where he ranks second in the league in restricted area field goals made (244), a category the Kings rank 13th in overall.

This will mark the third time in Sabonis’ six-year NBA career he has been dealt. Originally selected No. 11 overall in the 2016 draft by the Orlando Magic, he was traded with Ersan Ilyasova and Victor Oladipo on Draft night to the Oklahoma City Thunder for Serge Ibaka. After a season with OKC, Sabonis was traded — again with Oladipo — to the Pacers for Paul George.

For the Pacers, their rebuild and eye toward the future continues in the wake of the LeVert trade. In adding Haliburton, Indiana gets a former All-Rookie first team guard who has taken strides forward in his game in his second NBA season. He’s averaging 14.3 ppg, 3.9 rpg, 7.4 apg and shooting 45.7% overall (41.3% on 3-pointers) while proving durable in high minutes (34.5 mpg). Per our John Schuhmann, Haliburton ranks second in the NBA in pull-up 3-point percentage (minimum 100 attempts), trailing only Utah Jazz guard Mike Conley.

Sabonis’ longtime partner in the Indiana frontcourt, Myles Turner, will also be affected by this trade. Indiana spent the past 4 1/2 seasons with the Sabonis and Turner pairing and enjoyed varying amounts of success with it. Turner has seen his name in trade chatter over the past few days, but per Wojnarowski, he seems happy about playing with Haliburton and getting the lion’s share of the Pacers’ frontcourt minutes now that Sabonis has been dealt.