Reports: Pelicans, Willie Green negotiating, but no deal yet

Pelicans recently parted ways with Stan Van Gundy after one season at the helm. 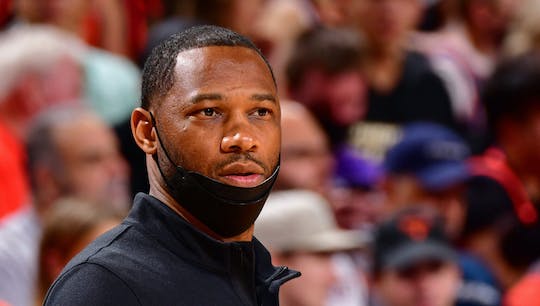 NEW ORLEANS (AP) — The New Orleans Pelicans are negotiating with Suns assistant Willie Green about taking over as head coach, but no deal is in place and discussions could extend beyond the NBA Finals, a person familiar with the situation said.

“He has not agreed to a deal,” the person said to The Associated Press Wednesday on condition of anonymity because talks were ongoing. “We are working through it and may wait until the Finals conclude.”

Sources w/ @wojespn: The New Orleans Pelicans and Willie Green are nearing completion on a deal that will make him the team’s next head coach.

The deal is expected to be finalized this week.

Should Green ultimately take the job, he’ll arrive in New Orleans at a time when pressure is rising to give young star Zion Williamson faith that he can find long-term satisfaction with the club that drafted him first overall two years ago.

Green, a former NBA player who turns 40 on July 28, would become a first-time head coach after serving as an NBA assistant coach the past five years — first with Golden State and then with Phoenix.

Green was a member of two NBA title-winning staffs with the Warriors in 2017 and 2018. He moved to Phoenix two seasons ago to join the staff headed by Monty Williams, who also was the head coach in New Orleans when Green played there in the 2010-11 season on a team guard Chris Paul led to the playoffs.

With the Suns, Green has been widely credited as the architect of the team’s defensive system. Phoenix had the NBA’s sixth-best defensive rating (points allowed per 100 possessions), while high-scoring New Orleans missed the playoffs in part because of its 23rd rated defense.

Beyond his well-regarded acumen for on-court strategy, Green appears to command respect from NBA players. He had a 12-year playing career as a combo guard with Philadelphia, New Orleans, Atlanta, the Los Angeles Clippers, and Orlando.

“I couldn’t imagine going through this season without having Willie here,” Paul, now starring for Phoenix, said recently. “Willie just gets it.

“He’s just always been a guy that I could talk to about anything. He pushes me,” Paul continued. “And I think for him, not only being a good player in his own right, (but also) that time he spent with the Warriors on those championship teams, there’s nothing in this league Willie hasn’t seen.”

Another person has told the AP that New Orleans also viewed Brooklyn assistant Jacques Vaughn as a leading candidate before he removed himself for consideration a couple weeks ago, and that the club has high regard for Bucks assistant Charles Lee. The person also spoke to AP on condition of anonymity because the Pelicans have not publicly discussed the names of candidates to replace Stan Van Gundy, who was fired last month, just one season after replacing Alvin Gentry.

While Williamson is going on his third coach in three seasons, Green would be by far the youngest and least experienced – particularly by comparison to Gentry, 66, and Van Gundy, 61.

But it would not be the first time Pelicans basketball operations chief David Griffin hired a first-time coach with the expectation of quick success. Griffin was Cleveland’s vice president of basketball operations in 2016 when he gave Tyronn Lue his first head coaching job. The Cavaliers, with LeBron James and Kyrie Irving leading the club on the court, won the NBA championship that season.