Stephen Curry was injured Wednesday vs. Boston and will be out indefinitely with a reported sprained ligament in his left foot. 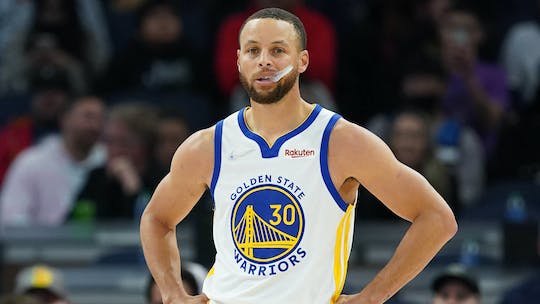 Golden State Warriors star guard Stephen Curry will be out indefinitely after reportedly suffering a sprained ligament in his left foot, per Shams Charania of The Athletic.

ESPN’s Adrian Wojnarowski and Ramona Shelburne report there is optimism that Curry will be ready to return by the start of the playoffs in mid-April. However, Wojnarowski and Shelburne also report Curry is expected to see specialists for further evaluation of his injury.

Curry went down with a left foot injury late in the first half and Golden State coach Steve Kerr didn’t like Marcus Smart’s lunging move at the reigning NBA scoring champ.
Smart got an earful from Kerr, then they chatted again after the Boston Celtics beat the Warriors 110-88 on Wednesday night.

Curry was injured with 4:19 remaining in the second quarter along the sideline while scrambling for a loose ball as Smart made a diving lunge on the play and landed on the reigning scoring champion’s leg. Curry grimaced in pain and got up but hobbled along before exiting on the next dead ball moments later.

That came when Smart made another aggressive play, receiving a Flagrant 1 foul 4:09 before halftime when he leapt and caught his leg on Klay Thompson’s shooting arm.

Kerr said Curry was slated to have an MRI exam after the game, the results of which are expected to be officially revealed sometime Thursday.

Warriors forward Juan Toscano-Anderson said Smart wanted the ball but might have been able to use more caution.

“I don’t think it was a dirty play,” Toscano-Anderson said. “… We all know that’s Marcus Smart, though, that’s how he plays, he’s gritty.”

Draymond Green was whistled for a technical for arguing a foul called on Thompson against Smart at the 1:48 mark, with Green throwing his arms up in the air in disgust and yelling.